The Doctor will see you now 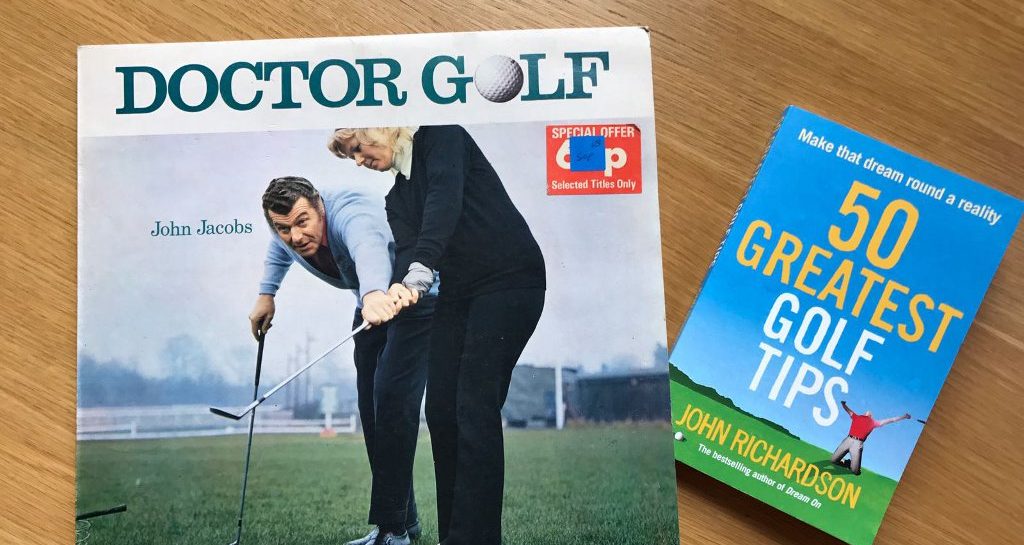 I’m one of those strange, but common, breed of golfers who isn’t very good and yet has hardly had a lesson in his life.

If ever there’s a game where expert advice is needed, it’s golf, but something holds me back.

I did once shoot 81 – a bizarre round as it knocked eight off my previous best even though it didn’t feel as if I did anything that special.

But despite a reluctance to fork out on a teacher who would probably get me shooting in the 80s again, I do remain very open to the idea of improvement.

Perhaps it’s that thing in my make-up where I’d rather discover solutions by treading my own path and finding something random as opposed to the conventional, off-the-shelf method of simply booking lessons.

One of the best golf books I ever read was John Richardson’s ‘Dream On’ – the true story of one man’s attempt to shoot a level par round within a year despite starting his mission unable to break 100.

John tries anything and everything to get his handicap down, thrashing balls at the range, reading a library’s worth of golf instruction books, pouring over videos and trying a mindboggling range of gizmos and gadgets.

I got to meet and become friends with John and also recall him telling me that golf magazines have been known to give directly contrasting advice within the same edition!

I won’t give the ending away if you haven’t read ‘Dream On’ but, for me, the most interesting aspect of the book is the journey not the final destination. The process of trying to improve, following blind alleys and suddenly stumbling on something that provides an instant fix… for a while at least until the magic vanishes again.

If I woke up tomorrow morning with an ability to suddenly shoot 15 shots better I would actually feel cheated that I hadn’t enjoyed the satisfaction of watching those shots come off my handicap.

John actually wrote a follow-up book called “50 Greatest Golf Tips” which sorts the wheat from the chaff from all his discoveries and collates his most useful learning techniques.

It’s a book you can just delve into, pick one or two tips in any order and take the ideas out to the course.

I had instant success with a couple and yet life then got in the way, the winter came, I didn’t play for about nine months and the book was filtered away onto a shelf and forgotten about.

Of course, when I did dust the clubs off after a mate asked if I fancied a game at short notice, I’d forgotten everything again. Back to that familiar routine of just giving it a hit without much thought, surprising yourself that you’re not actually that bad given the lengthy absence and then the cold, harsh reality of old flaws creeping back in and nagging disappointment.

It’s a pattern that’s played out in my golfing career for about the last 25 years.

That strange disconnect between knowing that you need some ideas and swing thoughts to get better and be more consistent but not actually bothering to go in search of them has again held me back this season.

I’ve just turned up at courses, hoped for the best and sort of done enough to enjoy it. Golf’s like that. It gives you sufficient little highs to draw you back in. It fools you into thinking things might just ‘click’ even if that just ain’t gonna happen.

How are you magically going to get consistent results when there are so many inconsistencies in your swing and thought processes? It’s a question we hackers just put off and gloss over.

However, there’s a notion that the best discoveries present themselves when least expected.

And that’s what happened to me earlier this month when my mate Rich – a collector of cult oddities – walked into the office where I work and plonked a frayed carrier bag on my desk. “I saw this and thought of you,” he said.

It felt like vinyl and, as I peeled the bag off, I could see a 50p price mark. I love a good novelty record – Eddie The Eagle, Madge and Harold, ‘Tony Jacklin Swings Into‘ (Tone’s 1971 album of pop standards) – but this one was something a bit different.

‘Doctor Golf’ was released on RCA records in 1972 and sees renowned swing coach John Jacobs put his teaching beliefs on record. “Here, for a fraction of the price, is the man himself passing on his priceless prescription for good golf.”

Simplicity is the key, says Jacobs and a quote from Jack Nicklaus on the back cover highlights the point. “John Jacobs and I share the same attitude to the golf swing,” says the Golden Bear. “The simpler you can keep it, the better it will work.”

Side 1 is about getting those fundamentals right – grip and set-up – before describing the simple back and through-swing that Jacobs recommends.

Side 2 is a hotch-potch of subjects that frustrate the average player. Included are simple cures for slicing, pulling, hooking, pushing, topping and hitting behind the ball plus chipping, pitching, bunkers and play from the rough.

“The ladies come in for some special advice (erm, this was the 1970s),” according to the cover notes on the back while he concludes with some invaluable words about the art of scoring.

“Practical golf by Jahhn Jacobs,” says an American, 1950s washing powder ad voice as the needle hits the groove. “Sit back, relax and listen closely to a simple, foolproof way to improve your shatmaking and improve your scores.”

And then that reassuring baritone kicks in and John Jacobs takes me on a journey of discovery.

After several listens, some scribbled notes and some tangible results on the course, I was more than pleased to have listened to the Doctor’s advice.

I suppose I could have read this in a glossy magazine but by hearing it on record and working a little at picturing the images in my mind, it somehow helped the message sink in far better.

The point I’m making here is not to go out and rifle through charity shop records in the hope that you’ll find this same album or something similar.

I’m saying that help with your golf game can come from the most unexpected sources. Keep your eyes and ears open, try new things, be experimental and enjoy the process of trying to improve.

Not everything will work but it’s a far better feeling to know that you’re trying to do something about it rather than relying on the vague and misguided hope that it’ll somehow all come together when you get to the course.

To keep our golf game in the best health, we can all benefit from a repeat prescription.