Back with a 69: Golf writers weigh in 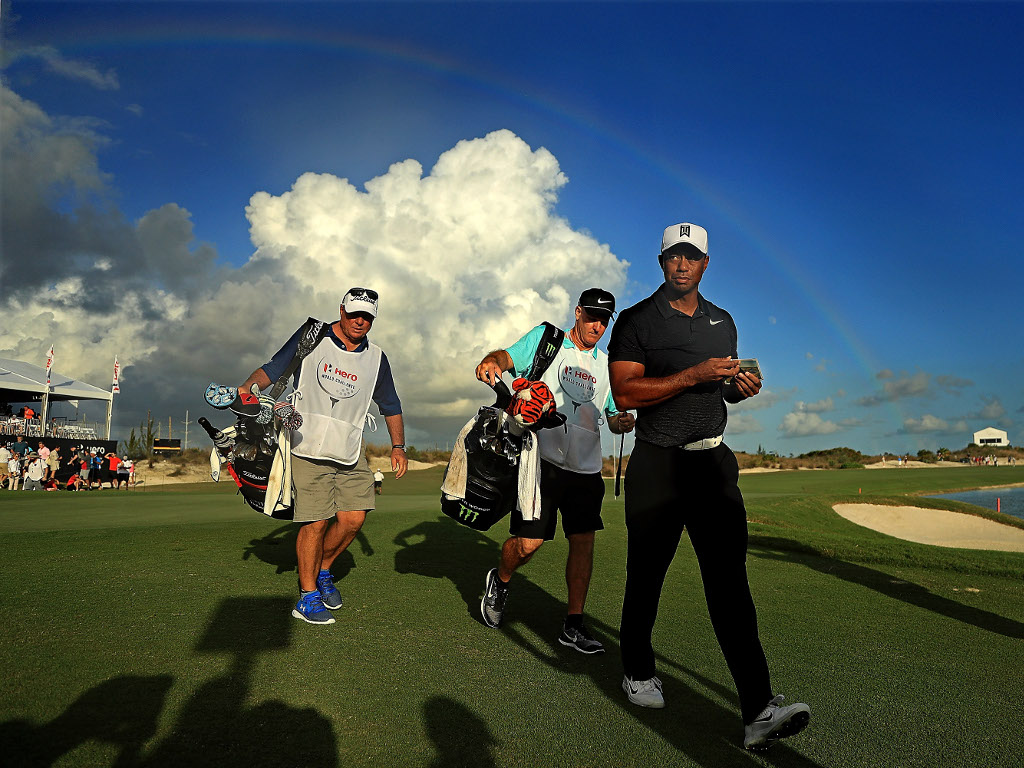 Dave Tindall takes a close look at Tiger Woods’ hugely promising return and several leading golf writers give Golf365 their takeaway on his comeback round.

Put in as the 40/1 outsider of the 18-man field by William Hill when he announced this as his comeback tournament, Tiger was cut to 28/1 by the time he teed it off alongside Justin Thomas.

Punters had seen the encouraging footage of his swing and positive comments from his peers and couldn’t resist having a nibble.

And yet when I ran a Twitter poll on the morning of ‘The Comeback,’ asking where Tiger would finish, the majority vote was that he would struggle.

I very nearly decided that the 4/7 about Justin Thomas beating Woods in their two-ball was ‘buying money’.

Thankfully I resisted and the agony would have been horrid as Thomas’ birdie putt at 18 lipped out before Woods holed from near similar range for par to force the tie.

To break 70 on his comeback was a terrific effort. Not surprisingly, many punters saw enough to start thinking about the Masters and Woods was cut to 33/1 in places to win at Augusta National next April.

End of day one: Tied for 8th, three behind leader Tommy Fleetwood.

“For me, I thought I did great.

“I hadn’t played in a while after some of the difficulties I’ve been through.

“To come out here and just score like I did, that was nice. It was fun to get out there and actually be part of a scorecard again.”

From @StephenCurry30 to @MichaelPhelps, there were plenty of people excited to see Tiger back on the course. pic.twitter.com/MBuLm8MIjt

Watching through some of the highlights with Todd Lewis from the Golf Channel, Woods said:

1st: Par. “I had a good tee-shot here. Trying to kind of pull it back up against the wind. It took a while for that wind to take it, took it late and carried it over the bunker.”

4th: Par. “I hit a terrible chip against the grain but I said the hole’s not over yet and so it was nice to make that putt and keep the momentum going.” Holed putt from fringe and fist-pumped!

8th: Birdie. “I had this putt a little bit more from towards the centre of the green last year and I remember it doesn’t break til a lot late and that’s what I tried to play.” Drained putt from 22 feet.

10th: Birdie. “Nice little flat 8-iron, tried to get it back there at 159 to the hole and was able to get it all the way back to the hole.” Holed 15-footer for birdie.

13th: Birdie. “This was a nice little one, coming across the green a little left to right. It took a while for the grain to take it but it finally did at the end.” 22-footer.

14th. Birdie. “This was from 95 yards, just a little Pitching Wedge and flighted it nicely.” Tap-in birdie.

Back-to-back birdies. 🐦 🐦@TigerWoods is one shot off the lead at the Hero World Challenge.#QuickHits pic.twitter.com/4HSBUi7E0M

“I didn’t know what I could do.

“I had a lot of adrenaline going there. I was hitting the ball a little bit longer than I normally do and I had to dial it back a little bit and those are the internal struggles that I haven’t been through as a player in a while.”

Rob Bolton (PGATour.com): “It was great to see Joe LaCava again, wasn’t it? His sighting meant that we were treated to the talents of Tiger Woods in The Bahamas where it was great to see Tiger sweat again, wasn’t it? The score (3-under 69) was as irrelevant as it was a bonus (to eliminate residual concern if just for one day). My takeaway is that Woods’ body and body language matched his rhetoric. The doctor gave the green light and the patient didn’t let off the gas. Woods’ return was crisper than the expectation. All of the pieces are there and they are in place. He’s a golfer again.”

Ben Coley (Sportinglife.com) “The detail can and will be pulled apart, but first in terms of scoring I don’t think we could’ve asked for or expected much more from Tiger. It’ll be interesting to see whether he is able to sharpen up around the greens as immediately as this week but otherwise it’s all positive. He drove it well bar one flare to the right, which he’s always had in the bag, and his iron play and putting were both sharp. And as for the short game, I take a generally favourable view: he might need more time to rediscover his touch but he absolutely does not have the yips. It’s with forced caution that I say roll on 2018. He looks fit and ready to compete.”

Josh Culp (Rotoworld, Futureofantasy): “This return went as well as you could have drawn it up for Tiger Woods. His driving was tidy all day, except for one drive coming down the stretch. Despite some blustery conditions, Tiger was knocking down flagsticks throughout the round and judging his spin very well. The only real weakness was his play around the greens. You can’t put too much blame on Tiger since the majority of the field was struggling on the tight bermuda lies. The real takeaway for me was his body language. He fist pumped a par-saver early in the round and didn’t look happy just to scribble pars. Woods left a few strokes out there on the greens, but he also didn’t swallow any doubles (two doubles in last year’s opening round). Despite all the recent (failed) returns, this time it feels different. Today’s round was certainly promising for Tiger Woods and for the game of golf moving forward.”

Matt Cooper (Golf365.com): “How could you not be excited about that round?!? I was so used to the awkward stiffness that I’d almost forgotten he *could* move properly. It’s like Tiger became the Tin Man and now he might be Tiger again.”

Alex Perry (National Club Golfer magazine): “I predicted four rounds in the mid-70s and, though he wouldn’t admit it, I’m sure Tiger would have been OK with that. This is about getting through the week unscathed. He’ll be ecstatic with 69 – despite the two sixes on his card. Tied 8th and three off the lead after round one? Bring it on.”

Ben Everill (PGATour.com): “There was plenty to be impressed by given the amount of time out of action. Off the tee he had power and speed and relatively good accuracy for the most part. The putter showed signs of life and a handful of approach shots were pure. Clearly he failed to get after the par-5s and has some rust in the chipping game. If he can show improvement in those areas the next few days then we will all have plenty to look forward to next year.”