Women’s teams shine on day one of GolfSixes 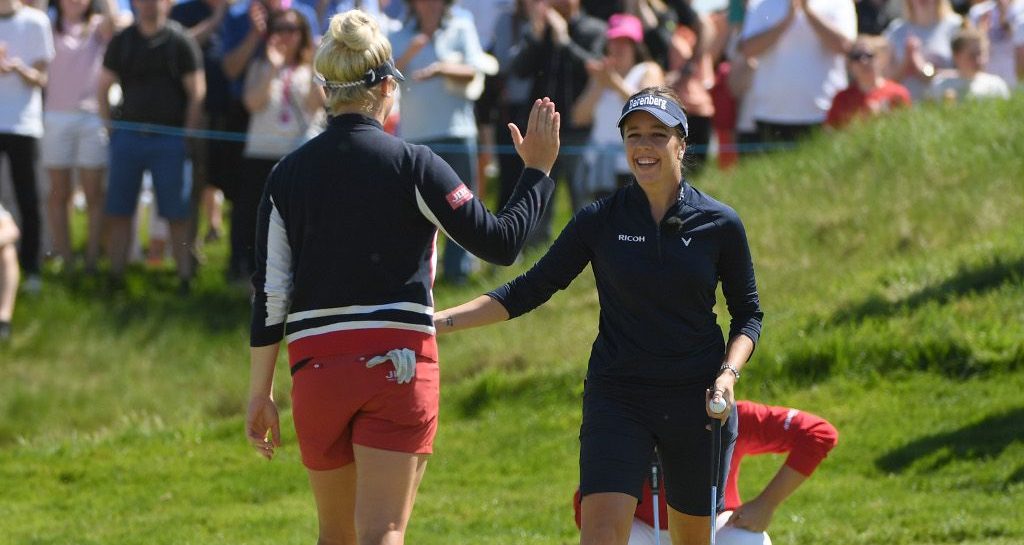 Both the England and European women’s teams made it through to the second day of the GolfSixes at Centurion Club on Saturday.

The European Tour’s new experiment returned for only its second year, after the inaugural event in 2017, and this time mixed and women’s teams joined the fun in a format which saw 16 pairs take each other on in greensomes match play over six holes in a round robin, with the top two teams in each group of four advancing to Sunday’s quarter-finals.

The European Women pair of Carlota Ciganda and Mel Reid defeated Danes Thornjorn Olesen and Lucas Bjerregaard – the defending champions – in a play-off to finish second in Group A behind Thailand.

And the eight quarter-finalists are… pic.twitter.com/krPnHTJcNB

Earlier, Ciganda and Reid had drawn with Denmark, defeated Thailand and lost to the USEA in their three group matches.

It was left to a play-off to decide who would join Thailand in the next round, and it was the European women who won the play-off courtesy of a tap-in par after all four tee-shots on the play-off hole were a long way from the cup.

“We’re here to prove a point,” said Reid. “Prove that women’s golf doesn’t get as much exposure and coverage as it should do and, hopefully, with us getting through to Sunday people will start to open their eyes a little bit.

Some golf there from the two England teams… pic.twitter.com/3iQ9Pl19lI

“We’ve just competed against the men and we’ve beaten them. We’re very competitive and very happy to be through to tomorrow.”

“We love playing with each other,” added Ciganda. “We love match play, it’s all or nothing. We know how good we are, we are both very relaxed. We don’t really care if we miss a shot, we just play and try our best. Hopefully we can start winning tomorrow and lift that trophy.”

The English pair of Georgia Hall and Charley Hull then joined the European women in the knockout stages after claiming a draw against the England men, beating South Africa and losing to Sweden.

That left them second in Group D behind their male counterparts.

“It’s been a great day, long day,” said Hall. “Me and Charley played really well and we got a bit unlucky in the last match, but we’re through and we’re excited for tomorrow.”

Hull added: “It’s been great fun. I just feel good vibes from this event and I think it’s really good because you see so many children and women and everyone around and the weather is perfect. I think it’s a really good event for golf.”

Other teams to advance to Sunday’s knockout rounds included Ireland and France, who topped Group C, and Australia and South Korea, who were the best performing teams in Group B.