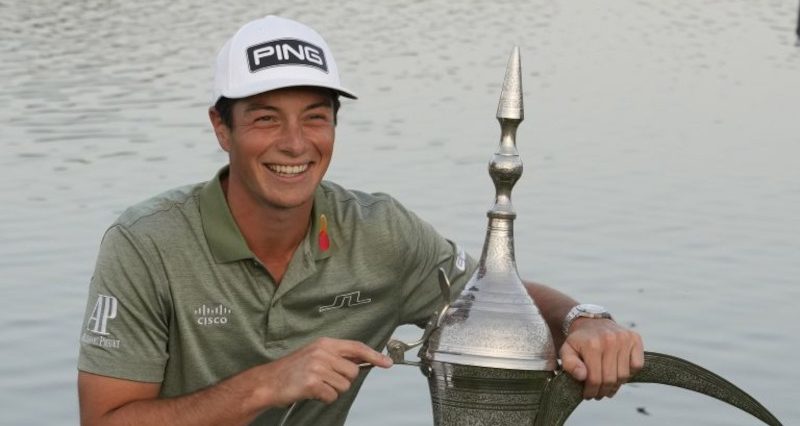 Viktor Hovland produced a stunning finish to win the Slync.io Dubai Desert Classic in a play-off after two-time winner Rory McIlroy blew his chances of a third title on the last hole.

Hovland covered his last three holes in four under par to force a sudden-death decider before edging out Englishman Richard Bland on the first extra hole at Emirates Golf Club.

McIlroy had looked to have the tournament within his grasp, holding a share of the lead heading down the stretch with his closest rivals having all finished.

However, after scrambling a par following a poor tee shot at the 17th, he then found the water on the last and the resulting bogey meant he signed for a closing 71 and finished on 11 under, one behind Hovland and Bland, who went on to replay the 18th.

Hovland found the green in two on the par five and sealed victory, his first in a Rolex Series event, with a two-foot birdie putt.

“This is pretty wild, I didn’t really think this was possible going into today,” Hovland told Sky Sports in an interview conducted by Bland’s coach – and TV presenter – Tim Barter.

“I knew I had to shoot a real low number but a lot of things had to go my way. I’m thankful that it did.

The victory was Hovland’s third in his last five starts – he also overturned a six-shot deficit to win the Hero World Challenge in December – and takes him to a career-high third in the world rankings.

“It’s pretty wild,” he added. “Earlier this week I was up to fifth and I was getting questions about how that felt.

“More of the same, I guess. Being number three is pretty crazy, but that stuff can vary week to week and I’m not going to let that stuff dictate my mood or how I do things. But it is very rewarding to see all the hard work paying off.”

Hovland’s chance looked to have gone when he bogeyed the 15th, but the 24-year-old then holed from 35 feet for birdie on the 16th and eagled the par-four 17th after driving the green.

That coincided with overnight leader Justin Harding effectively seeing his hopes disappear with a triple-bogey at the 11th, although McIlroy still looked in charge after salvaging a bogey on the 10th and picking up shots on the 11th and 13th.

Hovland, further ahead on the course, was not done yet, though, and he claimed another birdie on the last to record a 66 and set a clubhouse target of 12 under.

This was later matched by Bland, who – after three successive birdies around the turn – also birdied the 17th and 18th to join Hovland.

McIlroy failed to take advantage of the reachable 17th after a pulled tee shot and then went for the green from 267 yards on the 18th, only to slice his approach into the water.

After taking a penalty drop, McIlroy hit a good wedge to 15 feet but saw his par putt catch the right edge of the hole and stay out.

That left Hovland and Bland, who is enjoying a late career renaissance after his victory at last year’s British Masters, to fight it out.

Hovland held his nerve and Bland, despite an excellent chip onto the green, was unable to match the Norwegian’s birdie.

England’s Sam Horsfield and Tyrell Hatton were in a group of five to finish on eight under, along with Harding. Tommy Fleetwood faded to finish six under alongside last year’s winner Paul Casey.