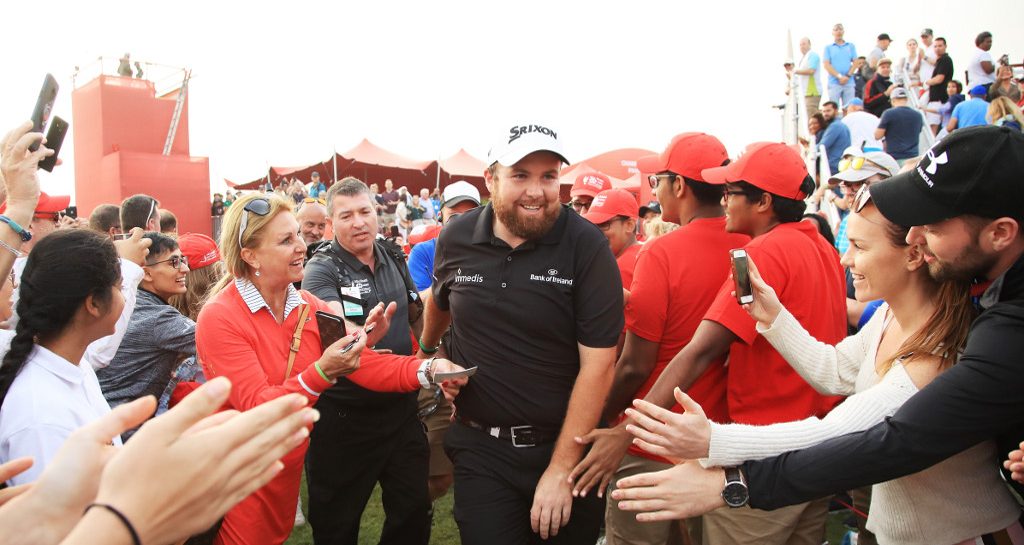 Shane Lowry looked to have spoiled his chances of a wire-to-wire win at the Abu Dhabi HSBC Championship – until Richard Sterne capitulated to hand the Irishman the trophy.

Lowry had held the lead for all three opening rounds of the first European Tour stop of the year, but his game deserted him over the first 11 holes of the final round, with two birdies more than cancelled out by four dropped shots.

As Lowry was heading in the wrong direction, Sterne was heading in the right one. The South African started the day three shots behind Lowry, but a superb front-nine 31 that featured six birdies and a single bogey saw him turn that deficit into a whopping four-shot lead with only nine holes to play.

Started: Three back
Now: Three ahead

Lowry’s shot at a fourth European Tour victory looked to have come and gone, but it turns out he wasn’t done yet.

Back-to-back birdies at the 12th and 13th holes saw the Irishman reduce the deficit to just two strokes, the latter coming courtesy of a huge 30-foot putt, and before anyone knew it it was suddenly all square as Sterne stumbled with bogeys at the 14th and 16th, the latter coming after a nervy six-footer for par went wide.

It all came down the 17th and 18th – difficult holes both – and it was Lowry who would thrive under the pressure to come out on top.

After missing the fairway right on 17, he found himself with 10 feet for par after a gutsy chip shot, and made no mistake to complete the vital up-and-down.

On the par-5 18th tee, it was Stern’s turn to leak it to the right, and though he took his medicine after getting a drop over to the right of the green, he couldn’t get up and down for birdie.

In contrast, Lowry produced two classy shots to reach the green in two, and then two-putted for a triumphant birdie that saw him clinch an unlikely one-shot victory.

281 yards. Tournament on the line.

Lowry would ultimately sign for a one-under-par 71 thanks to those three clutch birdies on the back nine for a winning total of 18 under par.

Sterne still ended up shooting a respectable 69 to finish one shot back, though that will be of little consolation considering how the wheels came off at the end.

Dutchman Joost Luiten was third after closing with a superb 65 – the low round of the day – followed by Louis Oosthuizen, who secured sole fourth place thanks to a 66.

World No 2 Brooks Koepka shot a third successive 70 to finish on 11 under, seven back, while fellow American and World No 3 Dustin Johnson saved his best for last with a 67 that left him nine shots adrift in a tie for 16th.