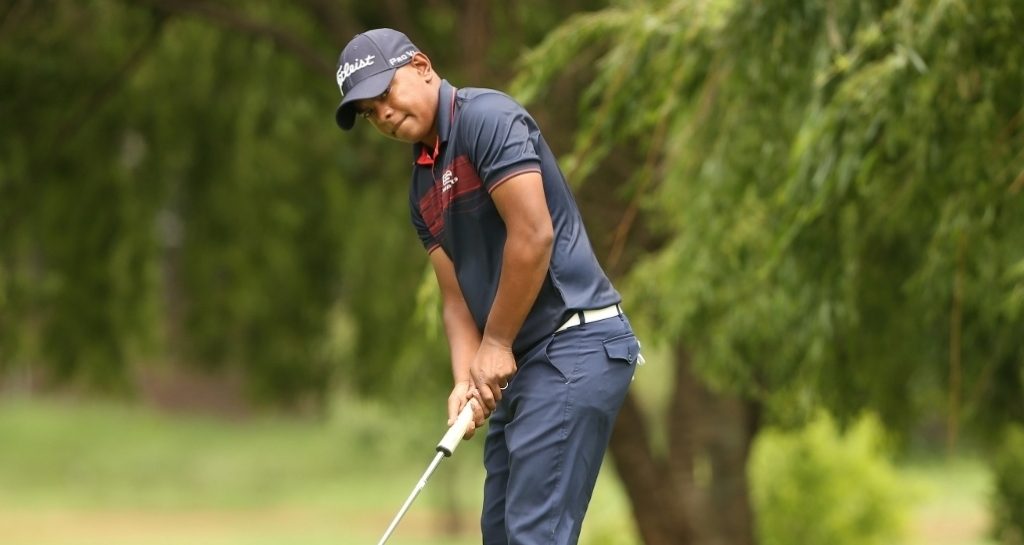 Local hope Keenan Davidse leads after the first round of the Joburg Open in South Africa with an eight-under-par 63.

Davidse blazed round the Bushwillow course at Randpark Golf Club – the tournament is played over Bushwillow and Firethorn for the first two rounds ahead of the cut, before the top 65 players and ties play the final two rounds on Firethorn – with nine birdies and a bogey to have a one-stroke edge over six players on seven-under.

“I don’t know what to say,” he laughed. “It’s not like I’m shocked. I’m very happy, pleased obviously. I didn’t really have any expectations coming into the week. I’m just out here to have fun, so I’m very blessed to be playing well.”

The Davidse family had a rough run of poor health recently, so it was not too surprising that he didn’t have any expectations.

“When I played the Sunshine Tour event at Simola, my little boy was sick with a bad chest. Then my wife had flu, and then I got flu, and lost a lot of weight. I couldn’t deal with that and the prospect of the heat in Mauritius last week, so I checked myself into hospital for four days,” he explained.

With Bushwillow playing to a par of 71, and Firethorn 72, it’s widely held that Bushwillow is the easier challenge. Davidse was not so sure. “Some people say Bushwillow is easy – and I have just shot 63 – but to be fair, it’s not easy,” he said.

In that group on six-under, one back from Davidse, were South Africans Jared Harvey, Erik van Rooyen and Ockie Strydom. England’s Matthew Baldwin and James Morrison and German Sebastian Heisele rounded out that group. They all played Bushwillow.

Ahead of them, Davidse is relishing the thought of taking on Firethorn in the second round.

“Firethorn is just another course,” he said. “If you play what’s in front of you, you’re going to play well, but if you play fearing the tournament, you’re going to play badly. I’ve experienced that a few times. I’m not here to paint pictures. I’m here to write down numbers. I got a good number down today and I’m just going to take it day by day.”

Part of that steely approach comes from the input he’s received from the Gary Player Class of 2017-18, the Sunshine Tour’s main development squad for previously disadvantaged professional golfers.

It benefits from the longstanding and continued support of the South African Golf Development Board (SAGDB), which was founded in 1999 as the official body for golf development in South Africa, as well as the Ernie Els & Fancourt Foundation (EEFF) in the collective effort to use golf to improve the lives of disadvantaged South Africans.