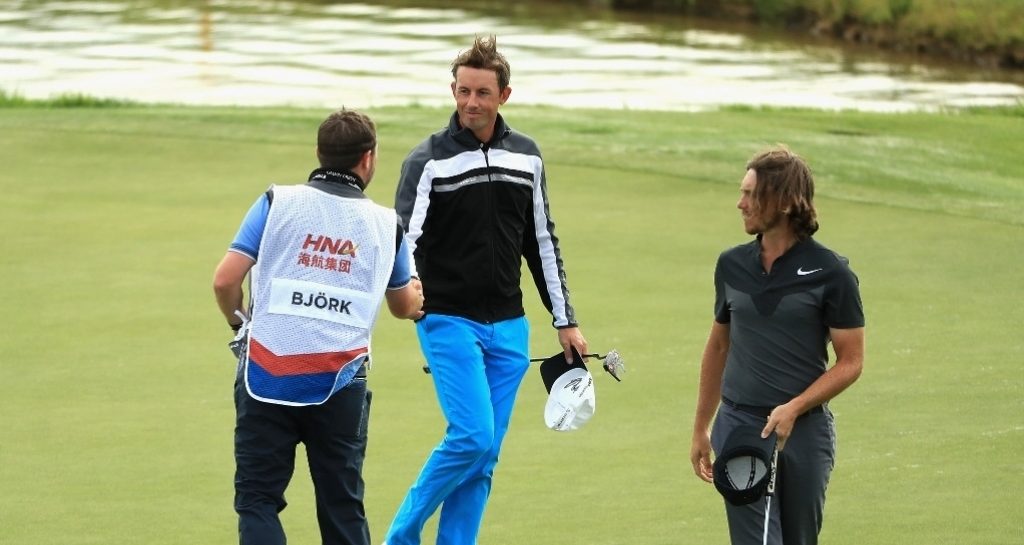 Peter Uihlein was joined by Alexander Bjork at the top of the Open de France leaderboard after Saturday’s third round in Paris.

Uihlein held a share of the lead overnight and held on to it thanks to a level-par 71 on a challenging day for scoring at Le Golf National.

“It was hard, it was a tough day, it was challenging for sure,” said the American. “I didn’t really feel disheartened making pars.

“It’s what you practise for and it’s what you play for is to get in contention on Sunday in the final group and see how it goes. I was proud of the way I handled myself on the back nine. I felt like I hit it a lot better after a shaky start. I’m excited for tomorrow.”

💬 “This is what you practise for” pic.twitter.com/QK645t2LrO

Uihlein started with a bogey at the very first hole and then made 12 straight pars before picking up his first shot at the par-5 14th.

That saw him remain on eight under par, level at the top of the leaderboard with Bjork, who shot a one-under-par 70.

The Swede was two-over-par through the front nine, but then bounced back superbly with birdies at the 11th, 14th and 16th.

Greens in regulation are overrated. pic.twitter.com/eW3GkbGSWE

“I’m happy. Happy with the way I played and the way I fought with the start and I came back in the end,” said Björk. “It should be a lot of fun. Really looking forward to tomorrow.”

Lying just one shot back are English duo Tommy Fleetwood and Andy Sullivan and Belgian Thomas Pieters, with Welshman Bradley Dredge a further shot behind.

Spaniard Adrian Otaegui, who shared the lead overnight with Uihlein, dropped off the pace with a 74. He now finds himself three shots back alongside Ross Fisher and Paul Waring.

Former World No 1 Lee Westwood (71) was among those in a tie for 10th on four under, alongside BMW PGA champion Alex Noren (69).

Spaniard Jon Rahm shot a 71, leaving him five back.

The stage is set for a dramatic final day, with a whole host of players in line for victory.