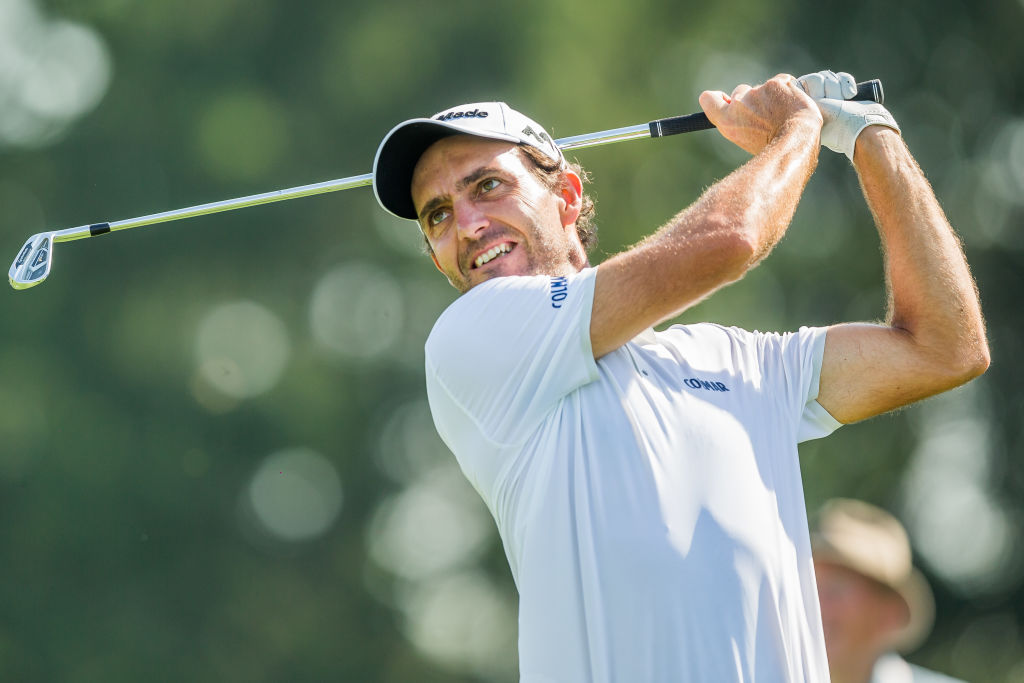 The great American novelist was talking of the beautiful and the damned, but he also knew his golf so he would have completely understood the dreams, nightmares, indecision and regrets which plague every golfer.

If anyone in the sport remains in doubt as to the evils of indecision and the importance of committing to every shot, the European Tour’s RSM Player Performance Study, whose initial findings have been revealed, aims to eliminate it entirely.

Conducted by Dr Matt Bridge from the School of Sport and Exercise Studies at the University of Birmingham, data has been collected from over 17,000 shots hit at last year’s British Masters, plus this year’s BMW PGA Championship, Irish Open and Scottish Open.

The academic study is designed to explore factors that have potential to affect player performance.

1. Spending less time over the ball could earn a European Tour player an extra €189k per season.

2. Quicker shots improve performance. A shorter time over the ball across all putts results in a 90 per cent increase in the likelihood of strokes gained.

3. Consistency of time spent over the ball leads to a greater chance of making the cut. When players are more consistent in rounds one and two they are 50 per cent more likely to make the cut compared to less consistent players.

Bridge, a senior lecturer in sports science and coaching, has been researching golf since 2001 and his work fits in perfectly with a new wave of modern analysis of the sport typified by the work of Mark Broadie.

“What Broadie has done with Strokes Gained statistics is enable us to place a value on each shot,” explained Bridge during the first round of this year’s British Masters at Close House. “Strokes Gained explains whether you performed better or worse than you could have expected.

“The RSM Study is looking at what elite players do that leads to those better or less good shots. We want to understand what happens in the pre-shot routine or when they address the ball.

“From an academic viewpoint this is a fantastic opportunity to look at world-class performers. Very little previous research has been done like this. Amateurs can gain from the study too, picking up on the keys drivers of top-class performance.”

At first glance one of the key finding is extraordinary: Bridge’s data indicates that players who made the cut were significantly more consistent in their looks to target and time spent over the ball at address than those who missed the cut.

This pronounced difference was most marked with the tee shot, but was replicated with approach shots and putting. 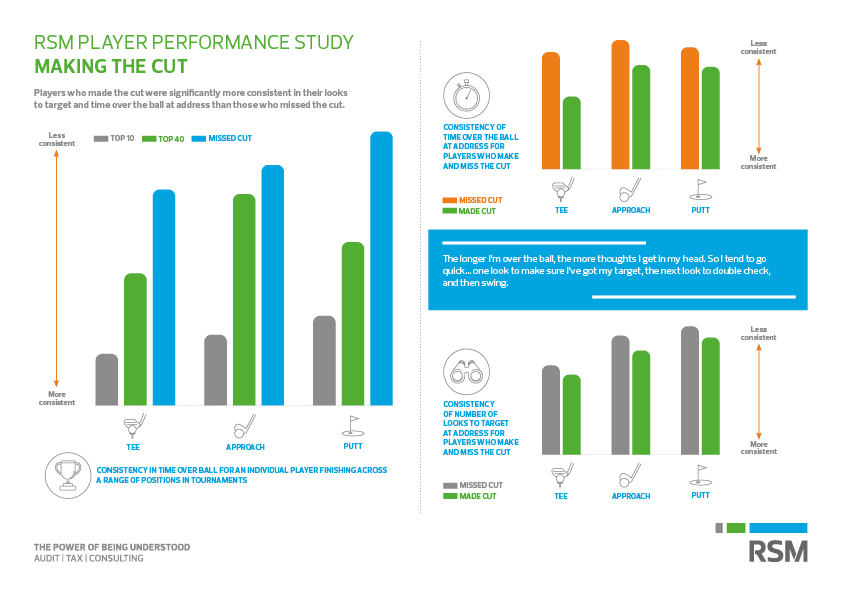 “The great thing about this study,” said Bridge, “is that from previous research I thought this might occur, but suspecting and knowing are two very different things.”

Bridge likes to stress the importance of repeatable patterns.

“We know from research papers that consistency of approach to the ball needs to be high and interviews with players reveals the importance of absolute commitment to the ball. If you’re unsure, you change things over the ball, you take more time, you look at the target more often, the indecision contributes to missing the cut.”

That all players become less consistent as they near the holes is to be expected, as a greater number of variables are introduced.

“Definitely,” confirms Bridge, who then adds a rider. “I would say you can be too consistent. We’ve recorded a player who was frequently very consistent but whose best performances came when an element of variability was thrown in. I was bowled back by that.”

A second key finding regards how time spent over the ball on approach shots varies with breaking par and, yet again, when first encountered the affect seems mind-blowing and its potential, for professionals and amateurs alike, far-reaching: on both par-4s and par-5s players who are quicker than average play the hole under par; those who are slower than average score over par. 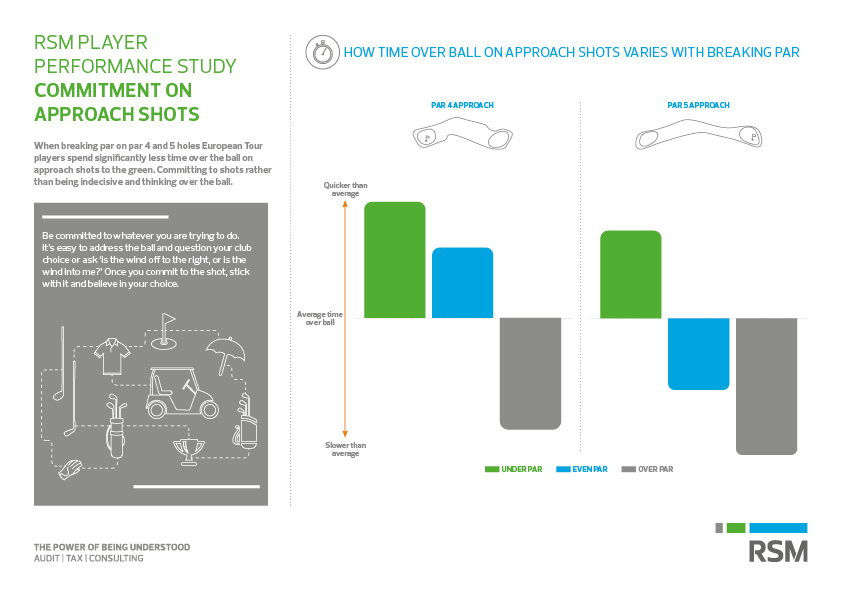 It’s another revelation, but it’s also crucial to understand what is being measured. It is not merely the case that running to the ball and hitting it quickly will lead to a better score. It is time spent over the ball once deliberation has been concluded; that less time is taken indicates that the player is committed and decisive.

The message is one Edoardo Molinari, winning of this year’s Trophee Hassan II and also a keen student of Broadie, attests to.

“Be committed to whatever you are trying to do,” he said after his opening round at Close House GC. “I think it is very easy to address the ball and still think, ‘Oh it is a 6-iron, maybe I should have picked a 7-iron, is the wind off the right or is it into me?’ I think once you commit to something just stick with it and believe it is the right choice.”

“Could findings like these be a potential game-changer?” asked European Ryder Cup team member Andy Sullivan. “Absolutely. As players in a complex game with so many variables, it’s crucial that we look at the data and how even tiny changes can help improve our performance. Personally, for my game, the findings have given me a lot to think about, but I think they’ll also be of interest to the amateurs that are looking for ways to get their handicaps down.”

Paul Waring added: “The average figure of €189,000 more a year if players improve the consistency of their routines and spend less time over the ball will certainly open a lot of eyes in the European Tour locker rooms.”

Perhaps no-one put it better than Bernhard Langer, who has always said: “Be decisive. A wrong decision is generally less disastrous than indecision.”

“Broader research literature says that if you internalize too much over the ball it negatively impacts on the shot,” said Bridge. “And the findings really back that up. These players are not massively quicker but it is a pattern that re-emerges across all players.

“It’s also true that most golfers have an optimal time. I had a PHD student who speeded up and slowed down time golfers spent over the ball. We learned that some are habitually too slow or too quick. It is individual to each player.

“That’s a key message. Find out what works for you and then deliver that consistency.”