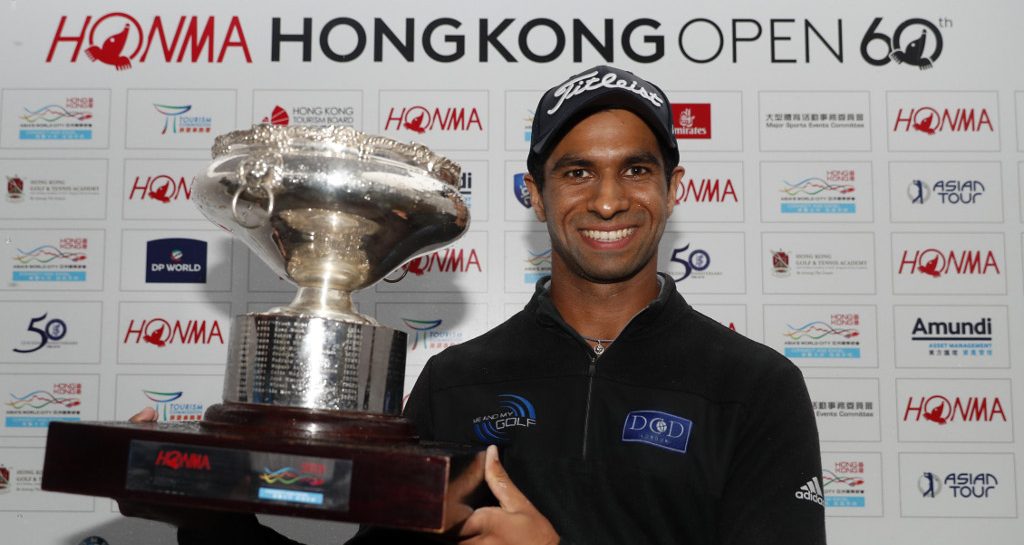 A rampant Matthew Fitzpatrick nearly spoiled the party, but Aaron Rai was able to hold on and clinch his maiden European Tour title at the Hong Kong Open on Sunday.

Rai started the day in Fanling with a massive six-stroke advantage but knowing that victory was hardly secure with the likes of Fitzpatrick, Tommy Fleetwood and Sergio Garcia chasing him down.

One of those European Tour champions was bound to make a move and apply some pressure, and it turned out to be Rai’s countryman Fitzpatrick.

Rai started with back-to-back birdies at the third and fourth but gave both of those shots back at the sixth and eighth to make the turn in level par.

Two more birdies at the 12th and 13th helped him stay clear at the top, but by this stage Fitzpatrick was on fire and hot on Rai’s heels.

Three birdies on the front nine were followed by four more after the turn as the 24-year-old Fitzpatrick managed to cut his six-stroke deficit at the start of the day to just a single shot.

And another putt drops for @MattFitz94.

Rai's six-shot lead is down to one. pic.twitter.com/2lV2q8XCZ3

Twenty-three-year-old Rai now found himself under serious pressure with three holes left to play, just one shot ahead of Fitzpatrick, but luckily for him, Fitzpatrick finally applied the brakes on his stellar round with a first bogey of the day at the 17th.

That once again gave Rai a two-shot lead, meaning his closing bogey at the 18th after a nervous three-putt did not alter the outcome of the match.

With Fitzpatrick unable to birdie the last, Rai was able to hold on and secure his maiden European Tour title after a closing 69 and 17-under-par total, just one shot clear of Fitzpatrick, whose final-round 64 just wasn’t quite enough.

For Rai, it’s the perfect start to the season, the three-time Challenge Tour winner having now graduated to the ranks of European Tour champion too – and courtesy of a wire-to-wire win too.

“It definitely hasn’t sunk in just yet. I’ll probably need a few days for that to happen.

“It’s incredible to win on any Tour, let alone The European Tour and let alone the Hong Kong Open.

“Matt played incredibly all day. It was tough but again, I really just tried to play the course as much as possible, rather than Matt, or anyone else who was playing well today.

“I luckily managed to do that for most of the way around. It’s tough considering the situation but I’m very pleased.”

Fitzpatrick said: “Obviously it was disappointing on the 17th there, such a simple bogey.

“But I gave it a good go. It was always going to be tough to beat him.

“The last two days he’s been very solid and not given anything away, which made my life more difficult.”

No one else came close to Rai and Fizpatrick on the day, with Victor Perez (67) and Jason Scrivener (68) sharing third place six shots back.

David Drysdale finished in solo fifth a further shot back after a 66, one ahead of Garcia (70), Rafa Cabrera Bello (63) and Shubhankar Sharma (67).