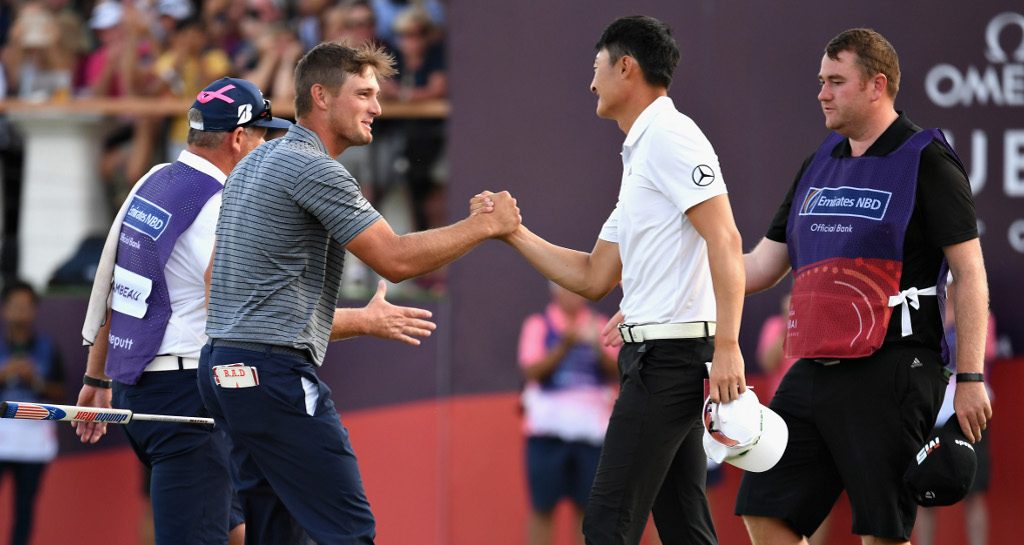 Despite widespread criticism, the R&A has agreed that the two-shot penalty imposed on Li Haotong at the Omega Dubai Desert Classic was correct.

Li fell foul of one of golf’s new rules during the final round of the European Tour event, incurring a two-shot penalty that many believe was unjust and ended up costing him over 80,000 euros in prize money and a place in the top 10.

Li was lining up a short putt for birdie on the 72nd green with his caddie, Mike Burrow, standing behind him. Burrow them moved away just as Li began to take his stance and holed the putt to earn a share of third place.

European Tour officials found Li in breach of a new ruling, introduced at the start of the year, that prevents caddies from helping their players with alignment.

But the R&A stuck to its guns on Monday, with chief executive Martin Slumbers saying: “We have reviewed the Li Haotong ruling made by the European Tour referees and agree that it was correct.

“There has been some misunderstanding of the new Rule and I would point out that it is designed to prevent any opportunity for the caddie to stand behind the player as he begins to take his stance.

“Whether the player intends to be lined up is not the issue.

“We appreciate that it was a very unfortunate situation yesterday and I completely understand Keith Pelley’s concerns when a Rules incident occurs at such a key stage of a European Tour event but there is no discretionary element to the Rule precisely so that it is easier to understand and can be applied consistently.

“We are continuing to monitor the impact of the new Rules but I made it clear to Keith that our focus is very much on maintaining the integrity of the Rules for all golfers worldwide.”