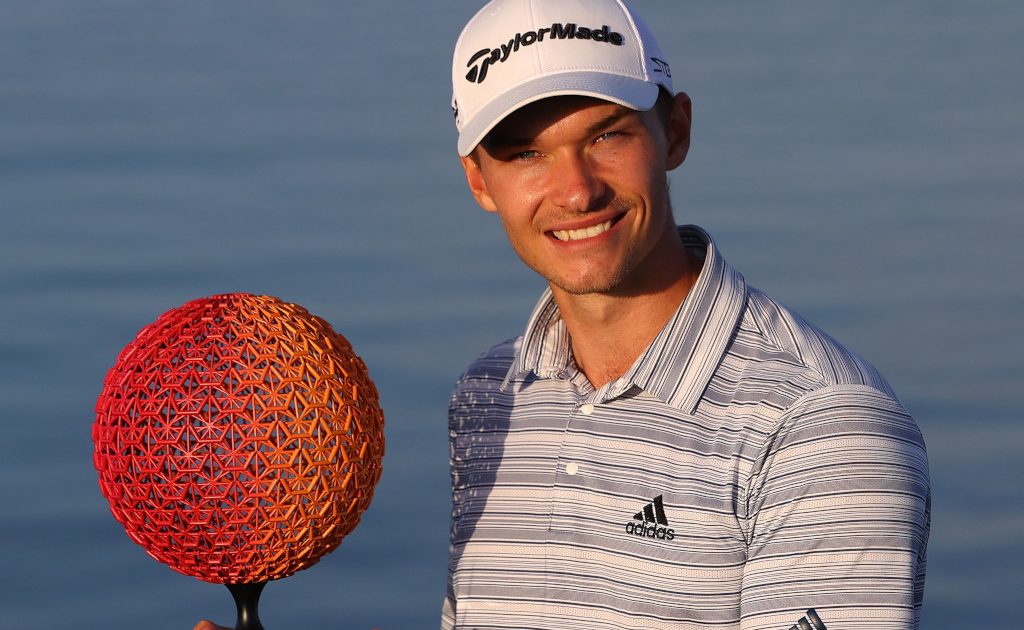 Nicolai Hojgaard recovered from a mid-round stumble to fight off the challenge of Jordan Smith and claim a four-shot victory at the Ras Al Khaimah Championship.

The 20-year-old Dane began the day with a three-shot lead and extended his advantage to five with an early eagle. But a double-bogey six on the ninth allowed charging Englishman Smith to close the gap to just one stroke as Hojgaard reached the turn.

And with Hojgaard dropping another shot at the 12th and Smith completing a hat-trick of birdies from the 12th to 14th, the lead changed hands as Smith led by two.

However, Hojgaard bounced back with a birdie at the 13th before producing the shot of the day on his way to an outstanding eagle on the next, and he suddenly found himself with a two-shot advantage after Smith, three groups ahead of the Dane, had bogeyed the 15th.

And from there Hojgaard was able to cruise to victory, making further birdies at the 17th and 18th to sign for a closing 68 and finish the week on 24 under par.

Smith, who began the day six shots off the lead, finished in outright second, three clear of the group in third.

Among the four-way tie for third was Li Haotong, who shot a sparkling 63 on Sunday to tie the course record.

After clinching victory, Hojgaard told Sky Sports: “It’s very sweet. It’s been such a tough grind today. Got off to a good start and then I struggled quite a bit.

“I had to dig deep out there and the turning point was obviously on 13 where I saw Jordan Smith had made a run and was two up when I was on the green at 13, and I stepped up with a clutch finish so I’m really happy.”

Smith, a winner at this course at the Ras Al Khaimah, 2016 Golf Challenge on the Challenge Tour, told Sky Sports: “I feel really, really good about this year.