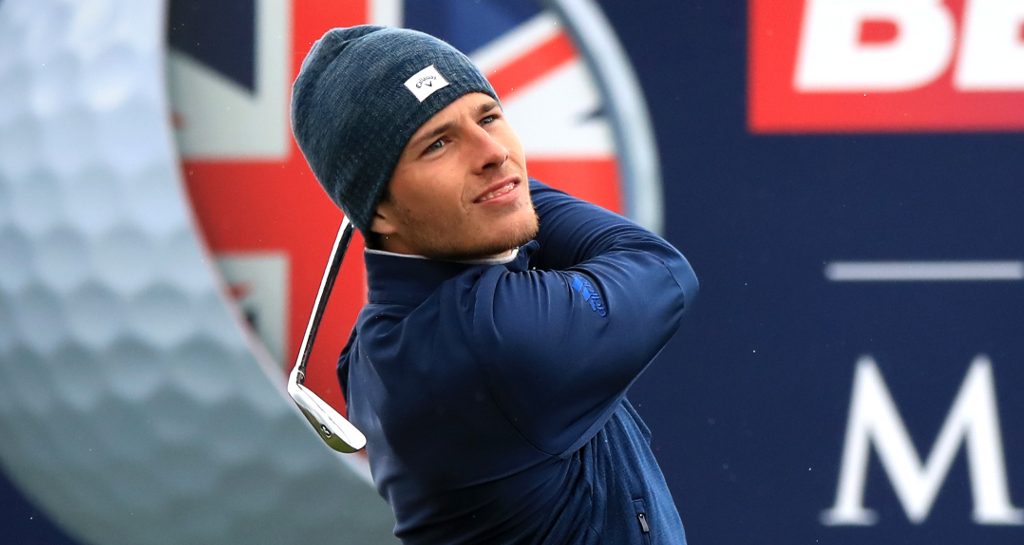 World No 837 Matthew Jordan produced an incredible nine-under-par 63 to break the course record and take a two-shot lead at the British Masters.

Making just his ninth European Tour appearance thanks to an invite, the 23-year-old Englishman smashed the Hillside Golf Club course record, shrugging off the cold and wet conditions to fire nine birdies in a flawless performance on the Merseyside coast.

Jordan, who only turned professional eight months ago, started with gains on the first, second, fourth, sixth and eighth, before adding two more at the 10th and 11th followed by another two at 13 and 15 to leave the rest of the field trailing in his wake.

It’s not the first time he has gone seriously low this year, having also shot a 10-under-par 62 en route to his first professional top ten at the Challenge Tour’s Turkish Airlines Challenge last month.

“I just tried to shoot as low as I could because I thought the guys out there, they are good as well,” Jordan said afterwards.

“I actually managed to shoot ten under on the Challenge Tour a couple of weeks ago. There I got the feeling how to shoot low. I had shot low previous to this but, on this stage, to go and do it and on this kind of course is impressive, to me, anyway.

“For me it’s just experiencing it, learning, seeing the types of courses that they play. I think just being involved in these kind of events just improves you because you’ve got to go out there and do it. You know those guys are here, so why can’t you?

“I got an invitation which I’m very thankful for, just to have the opportunity. I’m quite close to home, I’m staying at home, so I’ve been able to rest quite well.”

Not bad for a 23-year-old playing on an invite…#BetfredBritishMasters pic.twitter.com/qc0efSDU9E

Jordan lies two shots clear of Sweden’s Marcus Kinhult and countryman Matt Wallace, and a further shot ahead of another Swede and an Englishman, Robert Karlsson and Lee Westwood, who are joined on six under by Belgium’s Thomas Detry and Scotland’s Richie Ramsay.

American Sean Crocker and England’s Jack Singh Brar follow on five under, one shot ahead of tournament host and World No 16 Tommy Fleetwood, the highest ranked player in the field, who opened with a solid four-under-par 68 that leaves him five shots back in a tie for 10th alongside nine others.

“It was great,” said Fleetwood. “It was nice to get down to the golf and I enjoyed playing. I felt like I played really well, I felt in control most of the day so it was good and I enjoyed it.

“A lot of people come out today in that weather that’s pretty cold and wet. I know they are going to do that but it was still nice to see them and play.

So grateful to everyone for their support at Hillside today. Happy enough with my 68 but what about that start from our tournament invite @matthew_jordan7!?! Great to see a young local player taking his chance! #BetfredBritishMasters pic.twitter.com/DKmchVSOoi

“I’m enjoying the new experiences. I was definitely more comfortable today playing golf than doing a couple of the hosting roles and having a little bit of responsibility to the tournament.