Mickelson repents at the Scottish Open 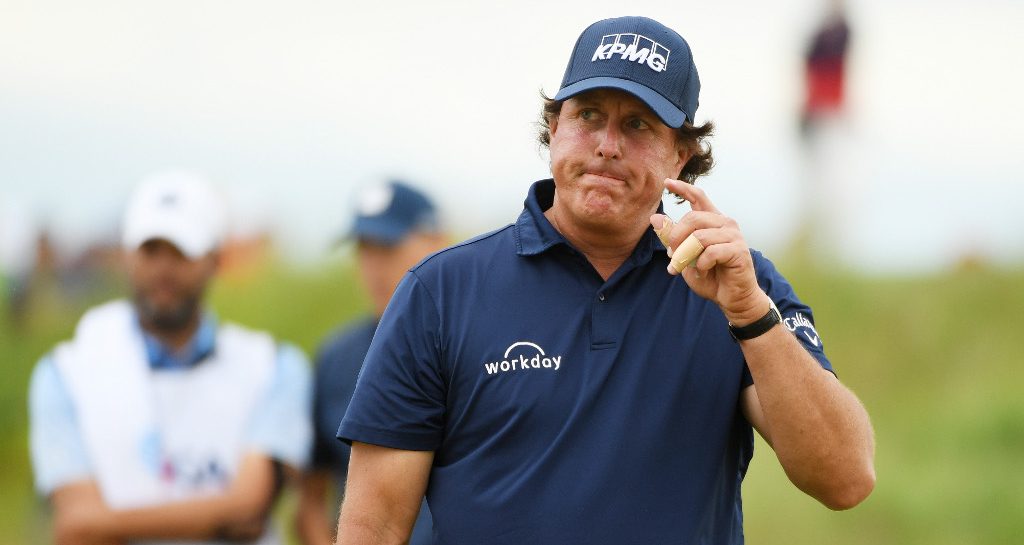 Mickelson has always understood the Mary Poppins edict that a spoonful of sugar helps the medicine go down, but after Thursday’s first round level-par 70 at the Aberdeen Standard Investments Scottish Open he turned first to Dick Van Dyke for inspiration.

Whereas Van Dyke adopted a cod cockney accent, Mickelson did his best to produce a credible Scottish brogue as he edged towards the waiting media, who it was believed he had been avoiding all week, and sheepishly said: “I’m not going to be answering any questions about today’s round.” Pause for comic effect. “Just about last month if that’s okay?”

Wry chuckles all round. The sugar really had made Phil’s medicine go down.

His perceived hesitancy was due to an assumed wariness of the likely persistent questions about his rules furore at last month’s U.S. Open, when he first hit a moving putt, then admitted he’d often thought of doing so, later refused to accept he had done anything wrong other than make best use of the rules, and stubbornly rejected notions he had acted outside the spirit of the game, even when fellow professionals tweeted their astonishment.

“I’ve not been trying to dodge anybody these few days,” he insisted. “I have been a little busy. I flew over to Paris and I played Carnoustie. I just didn’t have time. Anyway. Fire away.”

In truth it was far from a firing squad he faced in this genteel golfing town of Gullane, a few miles outside Edinburgh, but the questions were asked.

“I’ve had a rough month,” he admitted. “I haven’t been at my best. So I’m working at fixing that. I made a big mistake and I wish I could take it back, but I can’t. There’s not much I can do about it now other than try to act a little better.”

Was he concerned that the Scottish galleries, which have always admired him, would need winning back?

“I don’t know. But the thing is, in my career there’s been a lot of times when I have had to be accountable for decisions I did not make and the reason this one has been easier is that it was my own fault. The backlash is my fault.”

Has it been over the top?

“I do a lot of dumb stuff. I have these moments where I’m like in a cloud. That’s the way my mind works.”

“Maybe,” he said before fighting back. “It wasn’t the greatest decision. But if you want to focus on the worst moment in a 25 year career, there have been, you know, only four or five occasions like this.”

Perhaps the most fascinating answer came when he was asked about the difference between his take on what happened then (intractable) and now (repentent).

“Well, at the time, and it took me days, I was pretty angry. The way I show anger is not the traditional accepted way of, you know, throwing clubs and berating fans and marshals. I tend to be more passive aggressive in my actions and that’s what I was doing.”

It was classic Phil Mickelson. Even being contrite, he plans it in quite the most delightful way.