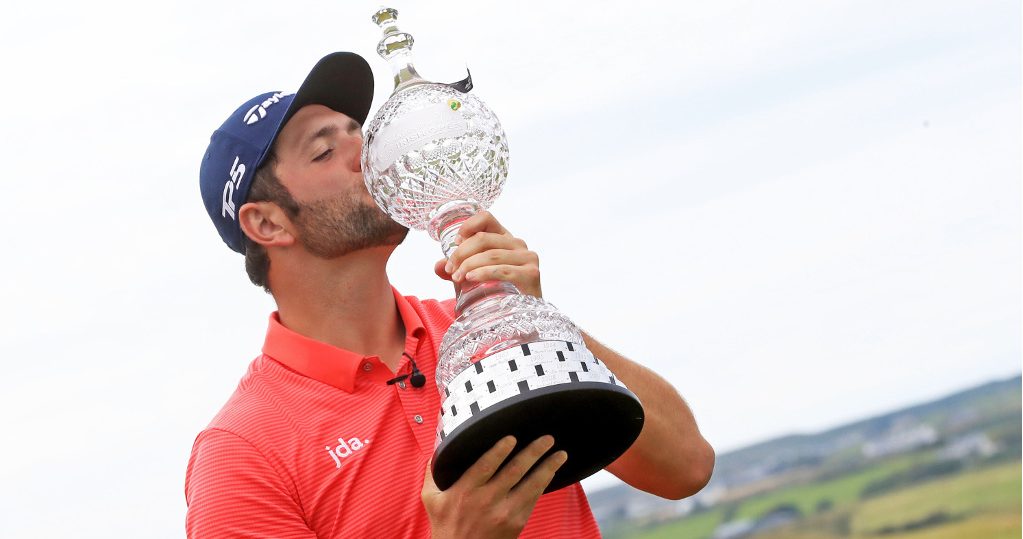 Jon Rahm won his fourth European Tour title at the Dubai Duty Free Irish Open on Sunday thanks to a stunning final round.

The Spaniard posted a sizzling eight under 62 around a benign Lahinch Golf Club, enough for a two stroke win over chasers Bernd Wiesberger and Andy Sullivan.

Rahm started the day five shots off the pace but he shot up the leaderboard after making the turn in 31. Rahm then rolled in a 15 foot birdie putt on the tenth and after reaching the par five 12th in two, he found himself with a shot at sharing the lead. Sure enough, Rahm holed a monster putt and shared the lead with Rafa Cabrera Bello.

In trouble in the deep rough on the 15th, Rahm produced a stunning scramble to set up a birdie chance, which he drained to take the solo lead. Another birdie on the 17th virtually sealed the win for Rahm, his second Irish Open title.

“I love this tournament,” the 24-year-old told europeantour.com.

“I love this country. I love the people and feel like I’m at home every time I come. I’m excited to repeat. I think Seve was the only Spanish player to win more than one and to join my name to that Cup again, it’s special. It’s probably one of my favourite trophies that I have at home and to have another one, it’s definitely a special moment.

“The list of winners, Faldo, McIlroy, Olazábal, Seve, the champions at this event, and to put my name on there is really special.

“My game was in great form, it just didn’t show the first two days. I couldn’t hole the putts and the weekend was the complete opposite.

“I knew I had to do it today to have a chance and, man, I kept looking at the leaderboard and looking up and after ten, I’m like, ‘okay, let’s get a good run’ and that eagle on 12 just completely got me going.”

Third round leader Robert Rock – who carded a record breaking 60 on Saturday – could not repeat his heroics and settled for an even par 70 to finish tied for fourth with Cabrera Bello and Eddie Pepperell.