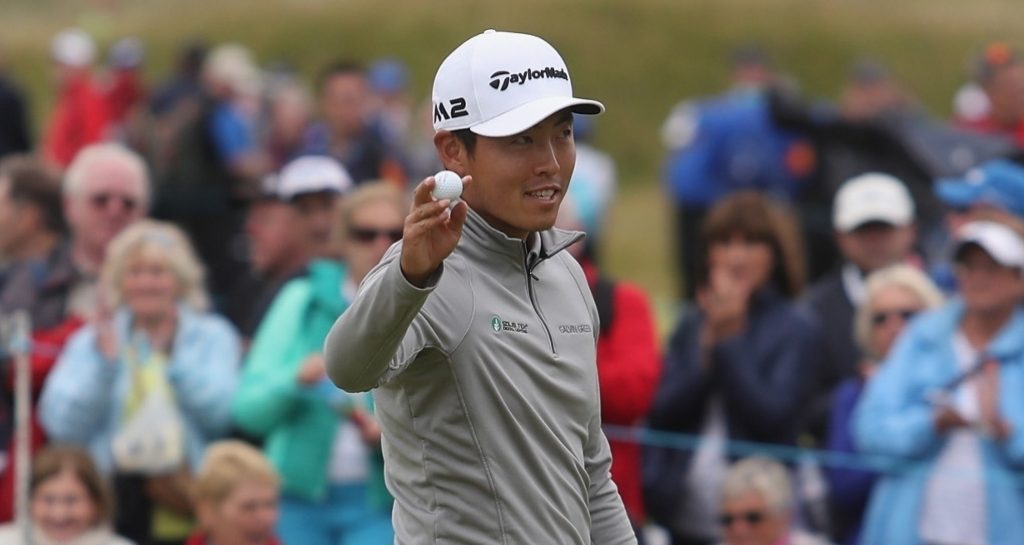 Daniel Im and Benjamin Hebert outplayed all of the big guns to finish top of the pile after the first round of the Irish Open in Londonderry.

American Im – ranked 542nd in the world with only a single Challenge tour victory to his name – shot a stellar eight-under-par 64 at Portstewart on Thursday to snatch the clubhouse lead.

He was later joined by Frenchman Hebert, who picked up four birdies on either side of the turn in a flawless first-round performance.

Im was particularly impressive on the front nine, carding six birdies during a stunning seven-hole stretch from the second hole. Two more birdies on the back nine – and two crucial par saves on the 17th and 18th – saw the 32-year-old finish the day tied for a one-shot lead.

Clutch par save at the last for Daniel Im.

“I think it was a bit of luck,” he said. “I think the big man was definitely watching out for me today. And then I striped the ball quite well at the end. I putted really well through the round. I made some good par saves and I made some good birdie putts to keep it going.”

Rahm fared superbly, his opening 65 leaving him just one shot behind Im and Hebert alongside English duo Oliver Fisher and Matthew Southgate.

The highly-rated young Spaniard mixed six birdies and an eagle with a solitary bogey to emerge as an early favourite for the title.

The best of @JonRahmPGA's opening 65 in under three minutes pic.twitter.com/knJWUTqvkA

“It was just a great day,” said Rahm. “The atmosphere was so good. My attitude was probably the best it’s been all year. I was positive all day. Kept my routine going. Stayed calm and the result showed how good it was.”

Making a rare appearance in Europe, Matsuyama also excelled with a first-round 67 that leaves him three shots back in a huge group that also features Justin Rose.

The talented Japanese player bogeyed the first but added birdies at the fourth, fifth, 10th, 11th, 13th and 18th to put himself in a great position for the rest of the tournament.

It was not a great day for McIlroy in front of his home fans, however. The Northern Irishman had to be content with a level-par 72 that leaves him with plenty of work to do, already eight shots off the leading duo’s early pace.

Two bogeys and two birdies on the front nine was all the four-time major champion could muster on a day for low scoring at Portstewart.

Also in the early running are the likes of Jamie Donaldson, David Drysdale and Matthew Fitzpatrick. The trio share sixth place on six under, two shots behind the leaders.