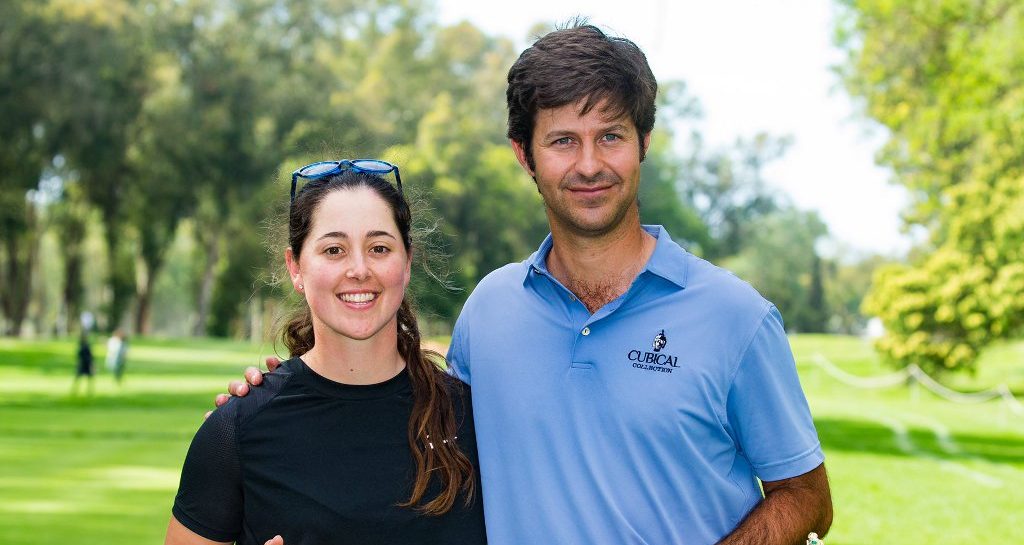 Jorge Campillo and Nuria Iturrios danced a golfing tango in Rabat to earn a double triumph for Spain in the Trophee Hassan II and Lalla Meryem Cup.

The words “Viva Espana!” were echoing around the cork trees of Royal Golf Dar Es Salam on Sunday as Spanish golfers completed an unprecedented double in the Lalla Meryem Cup and Trophee Hassan II.

In early afternoon, Nuria Iturrios completed a conclusive seven-shot victory in the former, followed three hours later by the success of her compatriot Jorge Campillo in the latter.

“Un dia historica,” cried the Spanish press, whilst the peers of Iturrios and Campillo stormed the 18th greens of the Red and the Blue Courses to spray the champions with fizzy water.

For Iturrios, the victory was her second both on the Ladies European Tour and in this event (she also won in 2016). For Campillo the win was even sweeter, coming in his 229th European Tour start and after suffering no less than six second-placed and four third-placed finishes. Incredibly no less than three of those near-misses had come in his last four starts.

For some that made this victory inevitable. “Sooner or later if you play as well as he’s been doing this year the win was going to come,” said one of his European Tour colleagues after the final putt dropped.

For others the questions were mounting. There was the sense that he was getting little more than a bloodied nose from endlessly banging his head (face first) on a door that seemed determined not to open for him.

When he started the day with two bogeys at the second and third holes it seemed yet another golden opportunity was going to waste. However it transpired that the 32-year-old had turned a corner.

“The Qatar Masters this year was really close and one that hurt,” he admitted afterwards. “I felt like I made mistakes coming in and I think that was a tipping point really. I learned lessons.”

When he made a tricky bogey putt at the third he says he accepted it for what it was – a shot-saving putt. He was similarly pleased with a 15 foot par-putt at the seventh.

“I told my caddie that we’d got through the tough spell,” he said, hinting that he had learned to be patient, to ride the difficult times, to appreciate that a final round allows for many twists and turns.

He made birdies at the eighth and the 11th which, allied to mistakes by his playing partner and pre-round leader Erik van Rooyen, meant that he approached the final holes tied for the lead.

A superb approach from rough at the 16th to eight feet earned him another par breaker, he went back-to-back at the short par-4 17th and then made an ultimately safe par-5 down the last to card 71, confirming a two-shot win on 9-under 283.

“It’s been way too long,” he then admitted. “Way too many near misses. It was a tough start to the day and I didn’t have my A game, but I hung in there. Hopefully I can win many more times, now that I have the first one out of the way.

“Ultimately I knew this was my best chance and I had to grab it.”

Those words were backed up by his caddie Borja Simo, who has been on Campillo’s bag throughout his eight year European Tour journey, the two friends both hailing from the same village in Extremadura.

“The difference this week?” Simo said. “It was that, unlike those other times this year, this time he was close to the lead at the start of the day. If he could nearly win when he has chasing we felt he could get the win when he was just one or two shots back. We felt it.”

For Van Rooyen the day was a tough one. Like Campillo he has exited stage left, leaving someone else to accept the limelight too often for comfort in recent times. He held the lead through the front nine, but couldn’t press on during the return to the clubhouse.

He shared second on 7-under 285 with Sean Crocker and Julian Suri, two shots behind the winner, with David Lipsky alone in fifth.

Over the road, on the Blue Course, the victory of Iturrios turned into a back nine procession.

She started the day tied for the lead on 10-under with playing partner Lina Boqvist and quickly asserted her authority, making unanswered birdies at the second and third.

Only briefly was she threatened. She found trees from the ninth tee, failed to find the green and left herself six feet for par. Boqvist, still two behind, had an eight foot birdie chance.

But the Swede missed, Iturrios saved par, the two-shot advantage was maintained and she completed the clinical win with nine pars after the turn.

“I have enjoyed this season,” she said. “I was second in Australia and then won at home in Spain. My confidence has been growing and I love playing on this course. In fact I like it more now than I did when I won the first time.”

She now heads the LET’s Order of Merit and a place in Europe’s Solheim Cup team is a possibility.

“We will see,” she said. “I would love that, but I am only 23 and I think I will play only five times on the LET before then so I need to play very well. I hope to represent Europe in the future though.”

Boqvist stumbled home with a round of 77 to share second with Caroline Hedwall on 6-under 286.