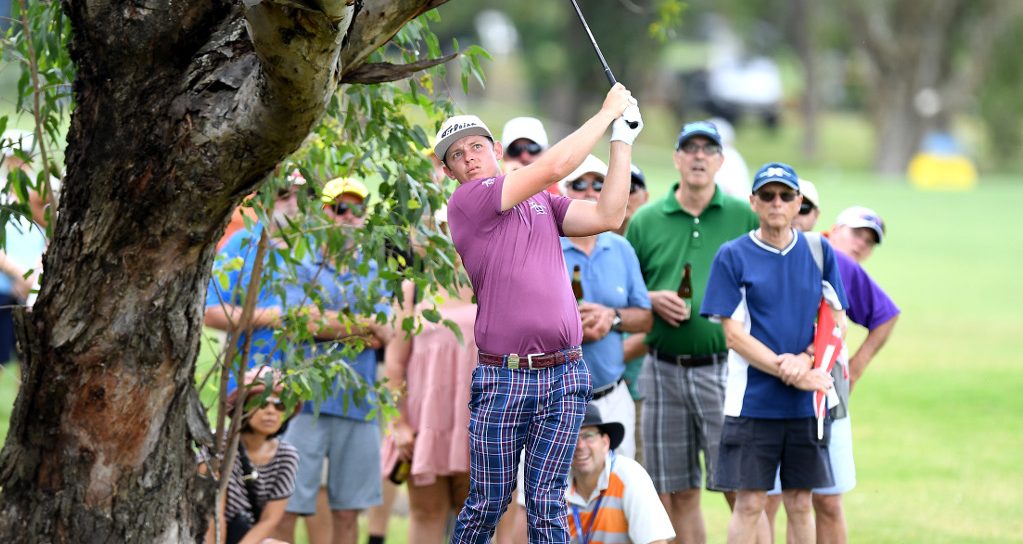 Defending champion Cameron Smith is back on top at the Australian PGA Championship after a superb seven-under-par 65 in Friday’s second round on the Gold Coast.

Smith will take a one-shot lead into the weekend after mixing eight birdies with a single bogey for a nine-under-par total at RACV Royal Pines Resort in Queensland.

That was good enough for a one-shot lead over fellow Aussies Marc Leishman and Jake McLeod.

Leishman carded a second successive 68, while overnight leader McLeod stayed in the hunt with a 70.

#AusPGA scores heading into the weekend:

Three more Aussies follow a shot further back in a tie for fourth – Matt Jager, who also shared the first-round lead, Dimitrios Papadatos and Christopher Wood.

American Harold Varner III is the first non-American on the leaderboard at six under, three back, after successive 69s.

The day belonged to Smith, however, who is looking to become the first player to successfully defend the title since countryman Robert Allenby in 2001.

The Beach Club at the 16th will certainly attract a few fans this week. #AusPGA pic.twitter.com/1jJPOIdJC6

Smith started like a house on fire, making no less than seven birdies in his first 10 holes. A historic round was beckoning at that stage, although the 25-year-old wasn’t quite able to keep up that rampant scoring, picking up just one more shot over the final eight holes.

Considering that it was good enough to see him return to the top of the leaderboard, however, it was still a fantastic return.

What a display from the defending champ. #AusPGA pic.twitter.com/0UKu6ljmM1

“It was good,” he said. “I thought I struck it nicely yesterday and the putts weren’t quite going in. I just didn’t quite have the speed yesterday.

“I did a little bit of extra work this morning on the green and it paid off. I was actually getting putts to the hole today, which is nice.

“I was just trying to do my best. I decided I wanted to get to ten, that was kind of my goal before Friday’s end, so one off is not too bad. Seven under, you can never complain about seven under.”