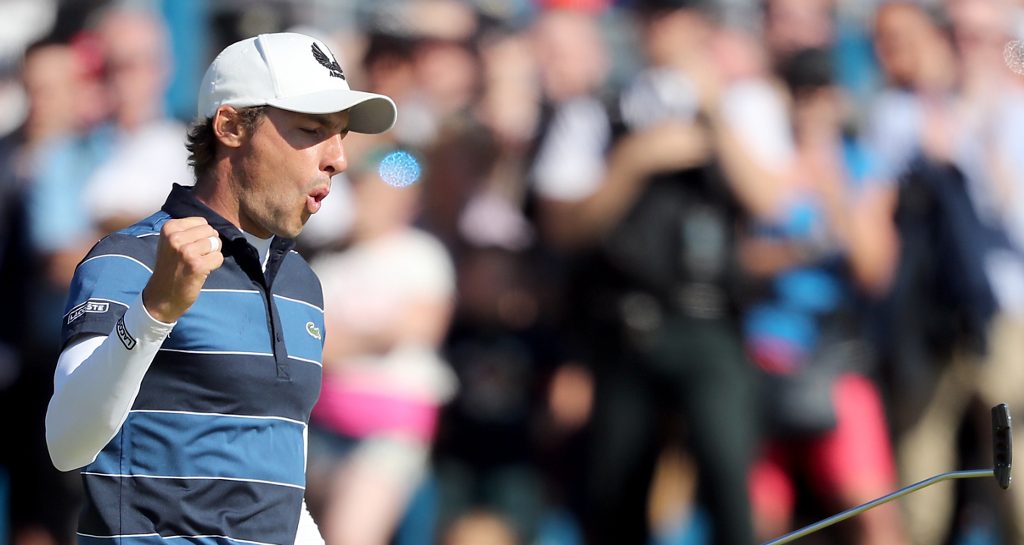 France’s Benjamin Hebert stunned the crowd with a sparkling eight-under-par 64 to snatch the third round lead, taking along a three-shot cushion into the final round at the Volvo China Open on Saturday.

Finland’s Mikko Korhonen and Spain’s Jorge Campillio took advantage of China’s Wu Ashun’s slip-up by posting rounds of 65 and 68 respectively to share second place with their three-day total of 14-under-par 202 at the Genzon Golf Club.

Wu was left to rue four costly bogeys which cost him to lose his grip on his overnight lead as he slipped to fourth place, four shots back of Hebert with a 72.

Wu had earlier produced a flawless front-nine to open up a three shot lead then but dropped four consecutive shots starting from the 12th hole to relinquish his place atop the leaderboard.

Hebert started the day four shots behind Wu and was five back just after the turn but he stormed ahead by firing six birdies and an eagle on his back-nine to take over the lead.

“Crazy game, isn’t it?,” he said. “I played very badly on the front nine where I didn’t feel good in my swing. I just tried to keep focused on what I’m doing and I found my rhythm in the back nine so I’m happy.

“It’s my first time leading after 54 holes and we’ll see. I’ve worked to be in this position and it’s going to be a very early start so hopefully we’ll have some good conditions and we’ll see what happens.

“I don’t want to look ahead, I just want to focus on the rest of my day, my rest and see what happens tomorrow.”

A back-nine to remember ⭐

Philippines’ Miguel Tabuena and Thailand’s Tirawat Kaewsiribandit meanwhile returned with matching 65s to give themselves an outside chance of winning in Shenzhen as they are eight shots back of Hebert, in a share of 14th place together with seven other players.