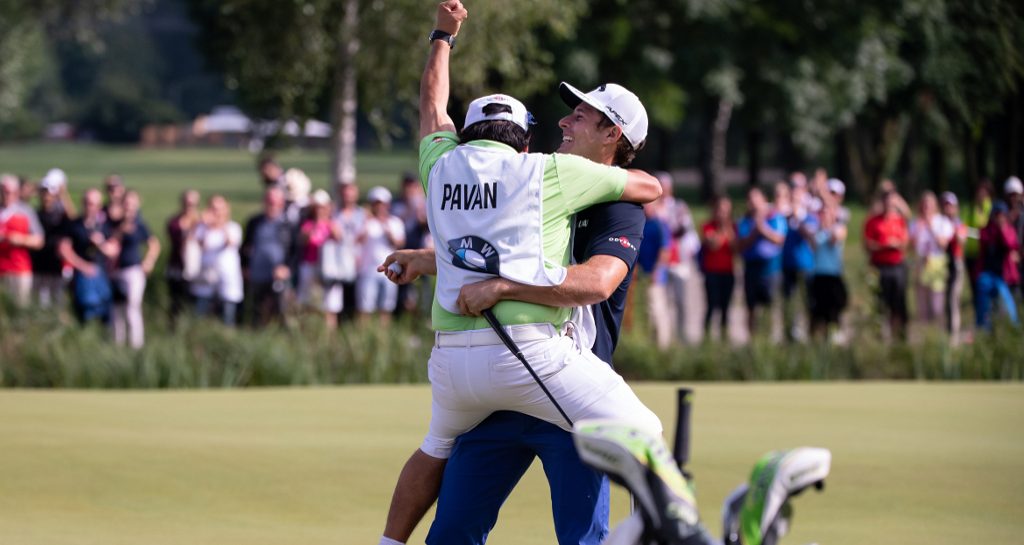 Andrea Pavan defeated Matthew Fitzpatrick in a play-off to claim his second European Tour title at the BMW International Open.

Pavan and Fitzpatrick finished 72 holes of the European Tour event at Golfclub München Eichenried tied at the top on 15 under par to set the stage for a sudden death decider.

Both men had birdied the 18th hole to give themselves another shot at the trophy, Fitzpatrick firing a three-under-par 69 and Pavan roaring back into contention after holding the first-round lead with a final-round 66.

Fitzpatrick looked to have ruined his chances with a poor approach shot on the first play-off hole, but the Englishman caught a huge break when his ball stopped just short of the water, allowing him to match Pavan with a par and force a second extra hole.

But a sublime approach from Pavan the second time around saw him make the simplest of birdies, and when Fitzpatrick failed to get up and down from the sand, the title went to the Italian.

“I was playing very well coming into the week, I just hit a few bad drives – it’s always a little bit of an Achilles heel. This hole (the 18th) is not the best for me without the driver but I managed to make birdie.

“I was feeling the rush. I had a little pitching wedge and luckily I got a decent lie but it just felt great, it was really close.

“Two years ago at this moment I was really struggling. I can’t thank enough my coach, my caddie, my family, my wife – it’s really amazing.”

As for Fitzpatrick, he was left wondering what might have been.

“I’m obviously disappointed,” he said. “It’s just been a tough season so far, really, not holing the putts. I’ve been playing well, that showed coming here and getting into a play-off. It’s a good week overall but disappointed not to top it off.”

As many as seven players shared third place two strokes behind the play-off duo, including Austrian Matthias Schwab, who had led by two with seven holes to play before back-to-back bogeys spoiled his chances.