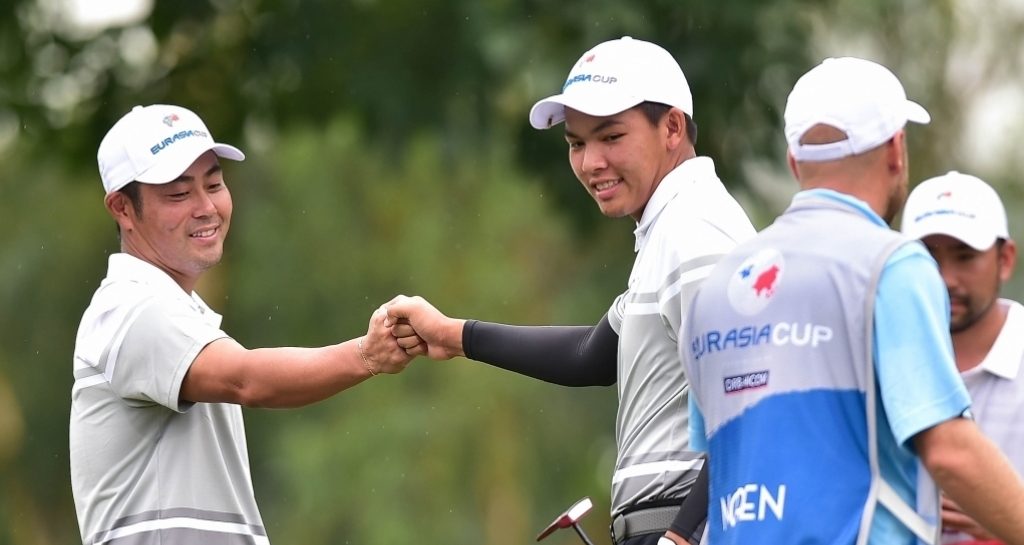 Team Asia produced another inspired performance at Saturday’s Foursomes matches to maintain a one-point advantage over Team Europe at the EurAsia Cup.

Team Asia has never led at any stage over their continental rivals in the history of the EurAsia Cup but after holding the lead for two days, team captain Atwal is confident his team can ink their place in the record books.

“I absolutely believe we can win the EurAsia Cup. Otherwise I wouldn’t be here. That has always been my belief since I took up this captaincy. I’m not surprised or shocked by our results so far. Because if you look at my players, they are fantastic and they are all winners,” said Atwal.

The day’s proceedings did not exactly go to plan for Team Asia as they lost their opening two matches at the Glenmarie Golf and Country Club.

The Indian pair of Anirban Lahiri and S.S.P. Chawrasia suffered a 3&2 defeat at the hands of Sweden’s Henrik Stenson and England’s Tommy Fleetwood in the first match while Thailand’s Kiradech Aphibarnrat and Korea’s Byeonghun An went down 2&1 to England’s Paul Casey and Tyrrell Hatton in the second match.

Was great partnering up with @Paul_Casey today and winning another 🔵 point 💪🏻💪🏻 #TeamEurope 🇪🇺 #EurAsiaCup pic.twitter.com/4mYBj3hBL0

But the formidable partnership of Malaysia’s Gavin Green and Japan’s Yuta Ikeda, who had earlier won their fourball match, gave Team Asia a huge psychological boost when they beat Spain’s Rafa Cabrera Bello and France’s Alexander Levy by one hole.

“They have been fantastic. Both of them have been so good and they have inspired everybody else. I’m very pleased with their pairing and everything that has been leading up to it and the way they have delivered,” said Atwal.

#TeamAsia fans!
Come and support on Day 3 of the EurAsia Cup at @GlenmarieGolf@gavingreen93 and Nicky Fung want to see you there!#EurAsiaCup@asiantourgolf pic.twitter.com/wmqTLvB1lz

That point sparked a comeback for Asia as Thailand’s Phachara Khongwatmai and Japan’s Hideto Tanihara showed their putting prowess to bring down Sweden’s Alex Noren and Ireland’s Paul Dunne 2&1.

“Putting wins matches. If you make putts, you’re going to win matches. The winning side always drains putts, whether they are long or short. I’m very lucky all my guys can putt really well,” said the Indian captain.

China’s Li Haotong and Malaysia’s Nicholas Fung then completed another memorable day for Team Asia when they won another point by beating England’s Paul Casey and Austria’s Bernd Wiesberger 3&1.

Amazing finish by Team Asia as Li Haotong 🇨🇳 and Nicholas Fung 🇲🇾 put the final points on the board in the Foursomes. We lead 6 1/2 against Team Europe's 5/12 @EurAsiaCupGolf pic.twitter.com/DQiAekDg7H

Team Europe’s captain Thomas Bjorn knows of his tough task ahead of the final Singles matches and is determined to put up a stiff challenge against an inspired Team Asia.

“We live to fight another day tomorrow and we’ve got 12 strong players, as I said, all week. I believe in all 12 of them, as I always will.

“We’ve got to go out and put some blue on that board and try and win the Singles. It’s as simple as that. We are slightly disappointed with the outcome today but I’m sure we can rise to what’s ahead of us tomorrow,” said Bjorn.