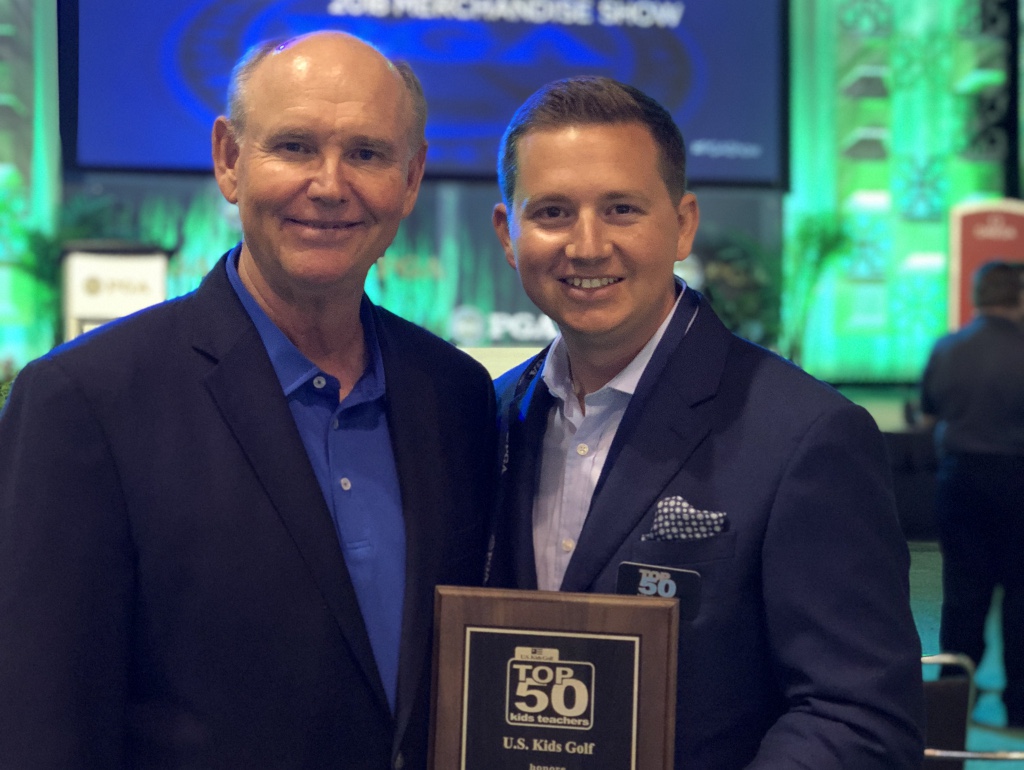 Stoke Park golf professional Tom Reid has been hailed as one of the top 50 junior coaches in the world … for the second consecutive year.

What’s more, Reid, 32, was the only Great Britain-based coach to make the final cut in the list presented by Coaches Institute, a division of the US Kids Golf Foundation, an organisation designed to promote junior golf.

The announcement – and presentation of his personalised plaque – took place at the PGA Show in Orlando, Florida, the largest annual golf trade show in the world. US Kids Golf conceived the top 50 awards in 2004, “to help parents find kid-friendly coaches … recognised for their outstanding ability to teach the game to kids”.

A delighted Reid, who has been at Stoke Park for almost a year, said: “I was chuffed as you can imagine. There were about 500 people in the audience and it was streamed live on Facebook. I’m not really one for getting up in front of an audience like that, so my priority was to get up there and get back down without tripping over …

“They tell me I’m the only person in Europe to have won it twice which is great. I now have to try to make it three years in a row which would make me a US Kids Golf Master Instructor – the only one in Europe.”

Dan Van Horn, the president and founder of US Kids Golf, said: “These coaches are honoured as more than instructors. They create outstanding opportunities for young golfers to learn in a fun and rewarding environment that instils a love for the game and engages the entire family. Their ability to connect with students and fully engage them in the learning process sets them apart.”

Reid moved to the five-star venue last March, from the Wentworth Club, where he had been instrumental in establishing the junior academy, and, with his fellow teaching professionals , has been instrumental in the success of the Stoke Park academy and the restructuring of the scholarship programme over the past 12 months.

He added: “What attracted me to Stoke Park was that it was a beautiful, busy, high-end club, and I came with the intention of helping to grow the academy, which we are succeeding in doing. I’ve done a lot of junior coaching and am looking to now restructure the junior development programme. But our overall intention is to make Stoke Park’s academy the ‘go to’ academy for any golfer in the area. And visitors can see for themselves: we are well on the way!”

Recently voted the number one golf resort in England, in the inaugural Golf World ‘Top 100 Resorts in UK & Ireland’ ranking, the historic Stoke Park – one of just two five-AA Red Star golf clubs in England – boasts 27 Harry Colt-designed holes and a thriving golf club with around 850 members. Its numerous facilities include a state-of-the-art health club, spa and pool, 13 tennis courts, and three restaurants and bars, including the three AA rosette fine dining Humphry’s.