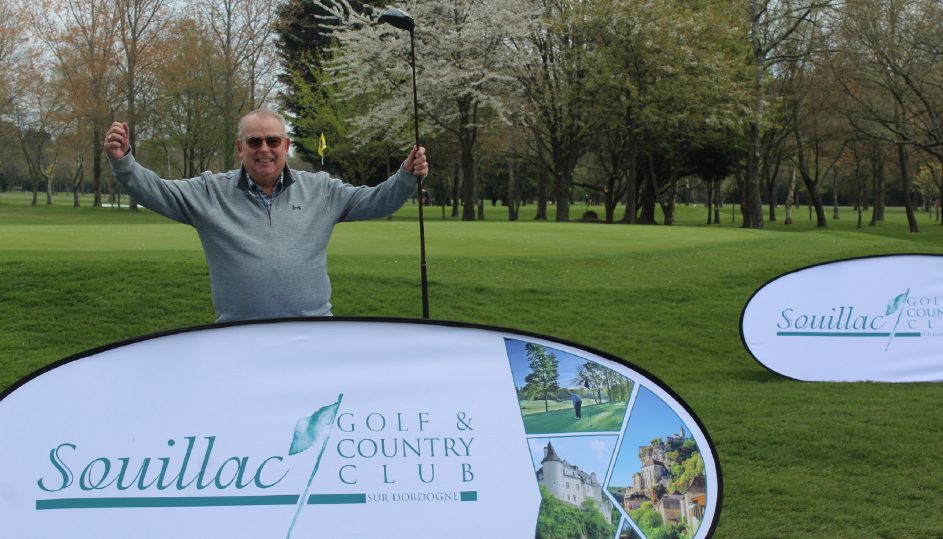 Food hygiene advisor Ken Moon had his son Paul to thank after finding the recipe for success – and winning a fabulous four-night golfing holiday for four people to Souillac Golf & Country Club in France.

Moon had been forced to reluctantly hang up his clubs after being sidelined by a crippling bout of gout and hadn’t struck a ball in anger for nearly 10 years.

But the 69-year-old, from Clanfield, Hants, was persuaded by his son to rejoin a club last November when he became a member of Waterlooville Golf Club, and his decision was rewarded when he scored 42 Stableford points to claim first prize in the ‘Swing to Souillac’ competition this month.

The victory was Moon’s first since becoming a member at Waterlooville, and the 28-handicapper is now looking forward to treating his son and two golfing friends to a four-night break at Souillac in France’s stunning Dordogne region, including all golf.

Moon, who is semi-retired, said: “It’s a wonderful prize and I cannot be more pleased.

“I couldn’t play golf for a number of years and it was my son who persuaded me to get back into it. He said to me six to eight months ago ‘Come on Dad, how about a game of golf?’ and I joined Waterlooville soon afterwards.

“We had a family holiday in the Dordogne when the children were younger but that was a long time ago and it will be great to go back there. I’ve played golf in various parts of the world including India and the Middle East – where I lived for five years – but never France. I can’t wait.”

Moon, who is hoping to take up his prize at the end of next month, beat a field of 150-plus players to win the Souillac holiday but he had to endure an agonising wait at the end of the competition before his victory was confirmed after two other players finished with the same score.

Anthony Tyrrell and Archie Reynolds also had high hopes of victory after matching Moon’s score, only to be beaten on countback after the winner sank a 20-foot putt for par on the final hole to record a nett eagle.

Moon, who is also a councillor at East Hampshire District Council, added: “I knew I was playing well and was in with a chance but it was the last hole that made the real difference. It’s a par-five and I get two shots on it.

“I was in one of the bunkers around the green in three, but I managed to get out of it okay and then I holed a monster putt which never looked like going anywhere else but in the hole.

“It’s just fabulous to win and, needless to say, I’ve been very popular at the club since with everybody wanting to be my friend!”

The ‘Swing to Souillac’ competition is one of a number of events being played at golf clubs across the south of England and East Anglia this spring and summer to help raise the profile of Souillac Golf & Country Club amongst golfers in the UK.

Set in the heart of the magnificent Dordogne Valley in 60 hectares of magnificent countryside, Souillac is the ideally situated to combine a relaxing golfing break with the opportunity to discover the many historic, cultural and gastronomic delights of the region.

The resort’s highly enjoyable 18-hole, par-67 golf course was designed by acclaimed architect Jeremy Pern and serves up variety and challenges to overcome in equal measure – as well as a collection of views to take the breathe away.

Away from the fairways, Souillac has a host of complimentary sports and leisure facilities including a covered driving range, numerous swimming pools, two tennis courts, table tennis, a boules court, a children’s play area, a bar and restaurant – serving a delicious mixture of drinks, snacks and regional cuisine.

Accommodation is provided in an array of spacious and well-equipped two, three and four-bedroom lodges gathered in nine hamlets around the golf course – each benefitting from its own swimming pool.

Hiking, kayaking, climbing, mountain-biking and horse-riding can also be enjoyed nearby, while Souillac provides the gateway for guests to discover some of the Dordogne’s other delights including a selection of UNESCO World Heritage Sites, pre-historic caves, medieval chateaux and its world-famous foie gras, cheeses and wines.

And getting to the resort couldn’t be easier with Souillac lying within close reach of five airports – including Brive, just a 15-minute drive away – as well as being easily accessed by the motorway straight from Calais.