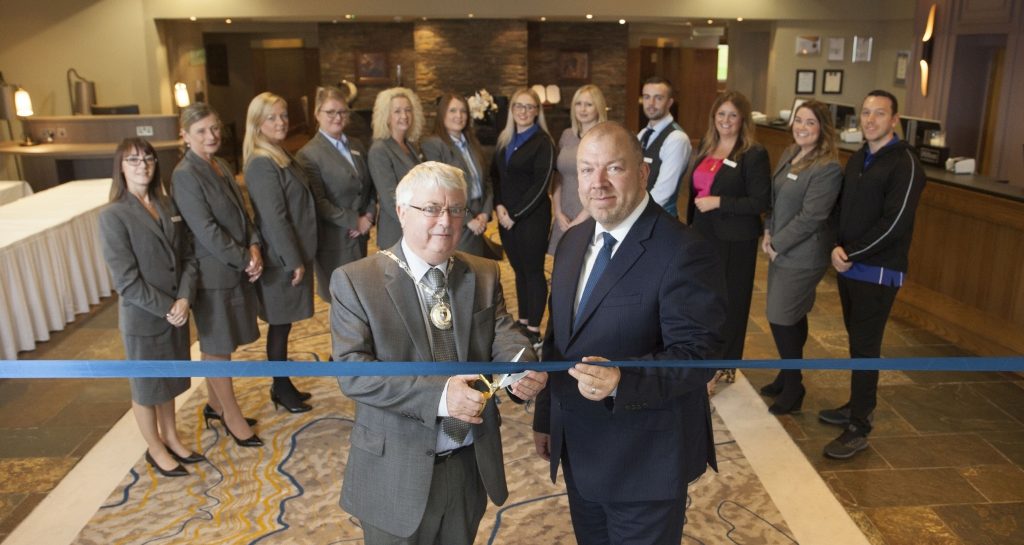 The home of Scotland’s only Seve Ballesteros-designed golf course has joined one of Hilton’s 14 market-leading brands and will be known as DoubleTree by Hilton Glasgow Westerwood Spa & Golf Resort.

At its relaunch, Tom Castles, North Lanarkshire’s Depute Provost, cut the ribbon to declare the hotel – formerly the Westerwood Hotel & Golf Resort – officially open under its new name. Cllr Castles then joined the hotel’s general manager, Bill Burnett, for a tour of the hotel, which has benefitted from a £1.3m refurbishment as part of the rebrand.

The refurbishment includes a completely redeveloped wing of bedrooms and the creation of four new luxury suites within the hotel. In addition, every bedroom received a new luxury Hilton bed with new bedding and pillows, the latest 50” LG TV, and the inclusion of mini safes and refrigerators.

The property joins 50 other hotels within the DoubleTree by Hilton portfolio in the UK, but, the only one in Scotland with a golf course attached.

The DoubleTree by Hilton Glasgow Westerwood Spa & Golf Resort – managed by RBH, the UK’s leading independent hotel management company – is situated in acres of spectacular grounds. The resort’s stunning 18-hole golf course – co-designed by Ballesteros and Dave Thomas – is as challenging as it is beautiful, as it meanders through silver birches, firs and heather, offering stunning views towards the picturesque Campsie Hills.

The signature hole, the par-three 15th – created by Ballesteros and known as the Waterfall hole – requires a tee-shot from an elevated tee to a green surrounded by a 60ft rock face. It’s not for the faint hearted and nor are the undulating moorland greens which test one’s mettle when standing over those nervy four-foot putts.

The 148-guest room resort offers 10 treatment rooms in the area’s largest award-winning spa, including superior leisure and fitness facilities. Guests also have the choice of two restaurants and bars – Flemings Restaurant & Bar, which offers a hearty breakfast and modern European cuisine for dinner, and the Grill Restaurant, which offers relaxed European cuisine for lunch and dinner.

Bill Burnett, general manager of DoubleTree by Hilton Glasgow Westerwood Spa & Golf Resort, said: “We’re pleased to officially call the hotel part of the DoubleTree by Hilton family. The brand is globally recognised, and reiterates to guests the exceptional standards of service they should expect when they visit us.

“It was wonderful to welcome Cllr Castles here to officially open the hotel under its new name, and to have the opportunity to show him around the hotel and introduce the team. We look forward to welcoming guests and offering them best possible experience.”

DoubleTree by Hilton is part of Hilton Honors, the award-winning guest-loyalty program for Hilton’s 14 distinct hotel brands. Book direct at Hilton.com, through the Hilton Honors app, or through other official Hilton channels for more perks.