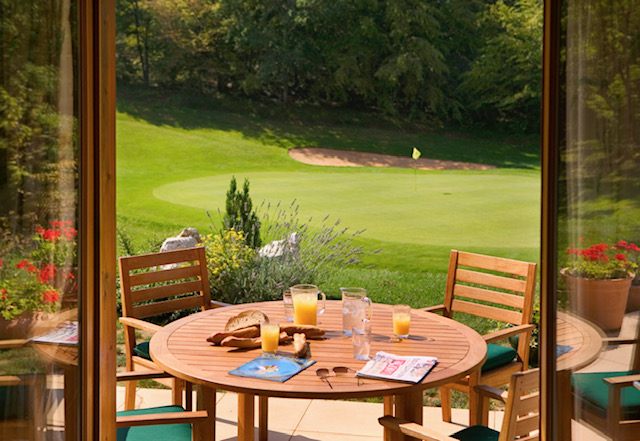 France continues to ride the Ryder Cup wave of last year and playing in the historic Dordogne Valley has the added attraction of combining a superb golf break with mouth-watering gastronomy and natural beauty.

Situated in the south west of France, the Dordogne is just a 90-minute Ryanair flight from London Stansted to the Brive Dordogne Valley Airport.

The ideal base to enjoy the many delights of the Dordogne is the Souillac Golf & Country Club, located in the peaceful department of Lot. The four-star resort is just 15 minutes from the airport and a 10-minute drive from the spectacular Dordogne River.

There are, in fact, three quality courses in the region – Souillac, Golf Du Coiroux and La Marterie – and I had the pleasure of playing all three during our short trip recently. 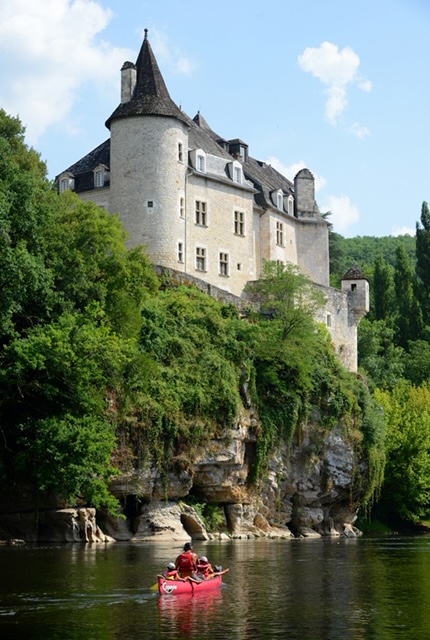 Souillac is also perfect for couples, groups and families to combine a relaxing golf holiday with the chance to explore the beautiful countryside and the historic Dordogne Valley.

It is close to several of the region’s must-see places, including Collonges-la-Rouge, Sarlat and Rocamadour. Other delights include a medieval chateaux and its world-famous foie gras, cheeses and wines. There are many other activities, including cave diving, rock climbing, potholing, cycling, fishing, hiking and kayaking.

At Souillac, we were housed in cosy, self-catering log-style lodges. There are two, three and four bedroom lodges in nine hamlets, each with its own swimming pool – perfect for families.

The delivery to the lodges every morning of fresh croissants, pains au chocolat and baguettes are a nice touch. And if you don’t fancy stoking up the barbecue in the evenings there is the alternative of eating at the resort’s own excellent Restaurant du Golf.

Souillac’s par-67 course is set in the middle of an oak forest and designed by acclaimed architect Jeremy Pern. It’s tight and hilly – so accuracy from the tee is imperative and probably best to leave the driver in the bag whenever possible.

Trees provide constant companionship while the greens are undulating and the rough fairly penal. There are also lots of steep gradients on several of the fairways, yet the layout is scenically beautiful with many panoramic views of the surrounding countryside. 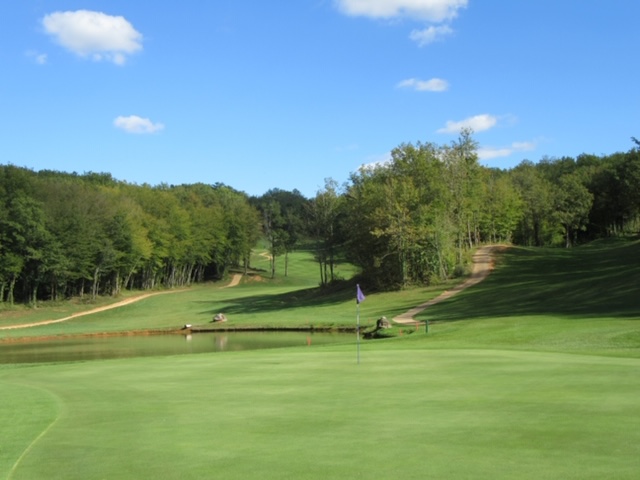 There are several challenging par-3s. The 170-metre downhill ninth is not for the faint-hearted – it has water on both sides of a small green. And the signature hole, the 213m par-3 12th, is truly spectacular with a huge elevation drop from the back tees to a sloping green.

The final par-3 17th is only 104m long but the tee shot is blind. It offers up a realistic birdie chance – or oblivion – if you pull it left into the steep gorge. However, once on the green the backdrop is breath-taking – sweeping views of the rolling hills of the Dordogne.

Golf Du Coiroux, in the commune of Aubazine, is more open and has some memorable lakeside views. Designed by architect Hubert Chesneau in 1976, this par-70 layout is also more forgiving that Souillac and has several dog-legs which calls for clever placement on the fairways.

The opening long par-4 is a case in point. There is water all along the right side of the fairway with the out-of-bounds driving range on the left. Reaching the tucked away green in regulation is not an easy start to the round.

On the back nine, the par-4 12th – another dog-leg – sweeps majestically down to a tilting green in front of a glistening lake while the par-3 13th is a worthy signature hole.

The lake also guards the entire right side to a tiny green while a bunker awaits any bail-out shot on the left – a daunting tee shot. Coiroux also a shorter nine-hole track to warm up on.

La Marterie Golf Club is located in the heart of Périgord Noir in the Dordogne, equal distances from Périgueux, Bergerac and Sarlat. Designed by architect Michel Gayon, it meanders through 70 hectares of woodland and hills.

The par-73 course also has many water features and bunkers, which criss-cross the forest and heath. The design is narrow and demands accuracy but it is still a fun course to play.

The stand-out hole on the front nine is the shortish par-4 fifth to a saucer-like elevated fairway with a small green fiendishly tucked away in the corner.

The home hole is delightful – a 165m par-3 from an elevated back tee with water on the right and a series of small bunkers to a raised green.

And golfers could to be in for a surprise when they visit the club’s small but cosy restaurant – being greeted in perfect French by the former Liverpool footballer David Burrows.

Burrows won both the League and FA Cup with the Reds back in the early 90s (he also played for West Brom, West Ham, Everton, Coventry, Birmingham, Sheffield Wednesday and England Under-21s) took over the running of the restaurant and bar with his wife Jacky and friends Steve and Rebecca Lea in March of this year.

Away from the fairways, the sacred cliff-top village of Rocamadour has been a place of Christian pilgrimage for over 1,000 years. At the top of the Great Pilgrims staircase – there are 216 steps – is the Eight Chapels of the sanctuary and a statue of the Black Virgin.

The pretty village of Colognes-la-Rouge is built of red sandstone and dates back to the eighth century. Its historic narrow streets are filled with artist workshops and bustling cafes.

The pre-historic caves of Luscaux – discovered in 1940 by four local teenagers – are well worth a visit as is medieval Sarlat with its honey-stoned buildings – while the Dordogne river itself has a rich and indeed turbulent past.

Flat-bottomed boots called ‘gabares’ were once part of intense economic activity until 1910. They used to sail down river carrying wood to Bordeaux before bringing back salt, wine and exotic produce from the colonies, pulling the boats from the riverbank.

A good meal always needs a good wine – and Dordogne’s vineyards have been producing their own reds, whites and roses for centuries. There is also a special straw wine made from drying red or white grapes dating back to the Middle Ages.

As a special treat we visited one of the best restaurants in the area, Le Chateau de la Treyne, on the banks of the Dordogne. It is a magnificent 14th century building with just 17 rooms and a superb Michelin star restaurant – one of four in the valley.

So, if its quality golf, food and wine as well as scenery you’re after then the Dordogne Valley makes for the perfect package.