Golf on the Costa Brava 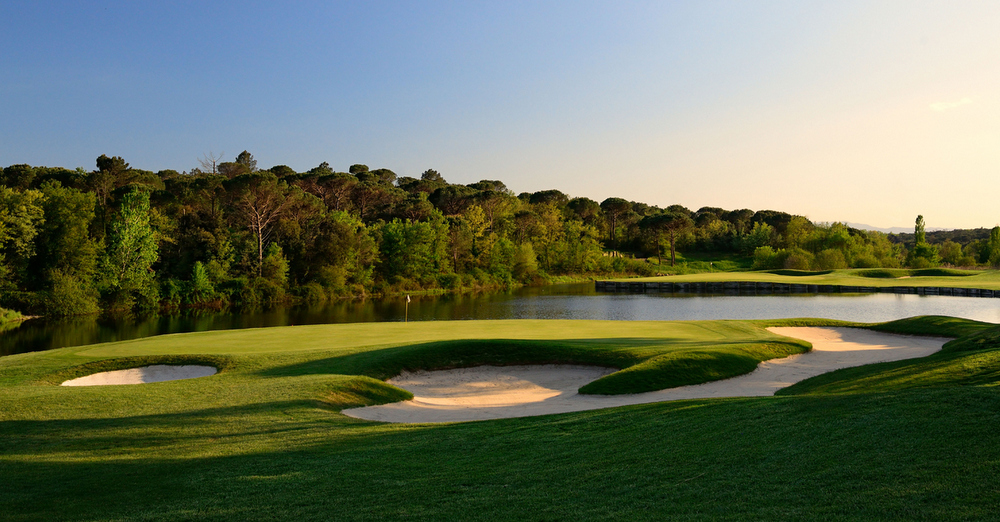 The Costa Brava, in the north of Catalan between Barcelona and the French border, is somewhere golfers from all over the world travel for great golf courses, superb food and spectacular scenery.

Here’s the Golf365 lowdown on the Costa Brava:

If the courses of an area fail to back up the attractions off the course, golfers aren’t going to maintain interest for long. But worry not in this part of the world – in fact the maturity and nature of the courses puts them ahead of most sunny, coastal regions in Europe.

It does have new resort courses, but the Costa Brava is notable for a series of tracks that are traditionally designed and have settled to become beautiful, nuanced challenges. Another standout feature is the backdrops, which are consistently magnificent.

Here are four excellent examples of the courses on offer:

The jewel in the Costa Brava crown

Not only is it a European Tour Destination, it is also ranked the number one course in Spain (and number three in Europe) in the influential Golf World rankings. Home to the two courses which annually host the European Tour’s Q-School, the Stadium course will be hosting the Open de Espana for the third time.

With good reason the venue is loved by tour players and handicap golfers alike. The clubhouse is a good start, as it immediately makes you feel special. There’s a friendly welcome from the staff, great locker room facilities and a bar/restaurant with great views across the course and the snow-capped Pyrenees in the distance.

The Stadium course is no disappointment either. Most striking is the fact that, although it tests the best professionals, it doesn’t overpower lesser golfers. Tee shots and approaches constantly call for shaped shots and ask questions that will be rewarded with a good strike.

A lake features on a few of the holes, notably the par-five third hole, with the second or third shot hit to a peninsula green. It’s a wonderful hole to play with every shot tempting you to ignore the risks of biting off more than you can chew.

The par-four 13th hole is the most visually stunning hole. From the elevated tee you peer straight down the fairway to a green perched on the edge of the lake. But your eyes cannot miss the backdrop – those snow-capped peaks of the Pyrenees.

It’s a top golf venue that doesn’t beat you up, it just leaves you wanting more.

The first thing that strikes you arriving at this course is the altitude. Your vehicle creeps up the hill, then creeps a bit further, and then a bit further still. You wonder where the golf course will be.

Then you start to see it, hidden behind the trees, with fairways and greens that cling to the slopes, awesome drops beyond, sea views in one direction, mountain view in the other.

The course is actually over 300 metres above the sea and creeps through a nature park containing olives trees, pines and cork oaks, but the astonishing truth is that, even as you play the 18 holes, you often cannot see the rest of the course, hidden as it is between the trees and by the slopes of the hill top.

It’s a really good test of golf too. It demands controlled, accurate hitting, but rewards good shots too. It has twice hosted the European Tour, but is another track that won’t intimidate the handicap golfer. If anything it suits them. It’s one of the more fun places you’ll play golf and the clubhouse bar is a little cracker – it feels more like a cool, quiet back street bodega in one of the nearby walled towns.

The city of Girona itself has both a new section and an old town, the latter being full of winding streets, overhanging buildings and great views from the elevated walls. And the nearby course is like a golfing version of that – a traditional layout, designed by Fred Hawtree, that has you smiling all the way round, sometimes because of the golf challenge, other times when glimpsing the traditional farmhouses which dot the property or the views of the surrounding hills.

The most modern design of these four, but well-matured and a good test. It seems repetitive to repeat that the views are great but it’s true – the Pyrenees inland, the flatlands of Emporda between the course and the sea.

The finish is perfect for a competitive match: a short but tricky par-four, a par-five that can be reached in two by the big hitters and finally a par-three in the shadow of the hotel spa which requires an accurate hit over a lake. An excellent way to conclude the round as the sun drops on the horizon.

As hinted above, Peralada has a hotel attached – in fact the Hotel Peralada Wine Spa & Golf. It’s a great spot to base yourself. The first tee is less than one minute from reception, there’s a lovely little bar, an excellent restaurant and the spa is wonderfully relaxing. There are few better ways to relaxed after, or prepare for, a round; the steam room and sauna are especially good.

Another option is the Sallés Hotel Mas Tapiolas, nearer Girona. Like the Peralada, it has an excellent restaurant and good spa. Ask for a view of the valley from your room because it is a stunning vista to wake up to. It goes without saying that a region which has catered for tourists for decades has plenty of superb options.

Catalan is rightly proud of its cuisine, whether it is the traditional food of the region or the Michelin starred restaurants that draw food critics from around the world. Fish and gamey meat always feature on the menu, especially in traditional dishes.

The more adventurous could head to one of Catalan’s 16 Michelin-starred establishments. Does the name Ferran Adria ring a bell? He was the head chef at the world famous ElBulli in Roses, fond of culinary foam and his influence has been profound. Current top gastronomic treat in the area is Celler de Can Roca in Girona, which has three Michelin stars.

There is plenty to do in the region and the land itself gives you a pointer: from the Pyrenees mountains in the background, to the beaches by the sea. Skiing, hiking, mountain biking and watersports are popular.

Girona, as mentioned, has a wonderful walled old town, full of traditional shops and intimate bars. It also has a river view that is vaguely reminiscent of Florence. Figueres was the home town of Salvador Dali and hosts his theatre-museum, a remarkable and surreal monument to his creativity. Nearby Peralada is only a small town, but is beautiful and boasts a popular casino in its castle.