German golfer Erb is a hole lot closer to a million 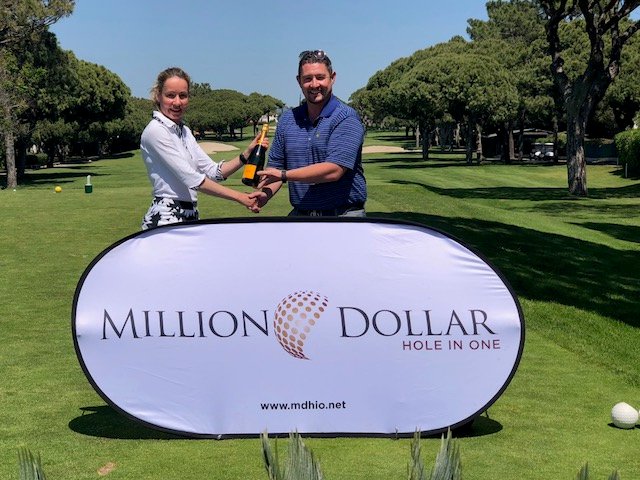 German golfer Corinna Erb proved all good things come to those who wait after she scored an ace playing the popular Million Dollar Hole in One (MDHIO) competition on the final round of her golfing holiday in Portugal.

Erb, from Berlin, Germany had already played the Old Course, Victoria, Pinhal and Laranjal before tackling Vale do Lobo’s Royal Course on the final day of her week-long holiday, where she netted her first ever hole-in-one on the par-three seventh hole.

The 27-handicapper, who is a member of Gatow Golf Club, in the German capital, used an eight iron to land her inaugural ace after 18 years of playing golf, hitting the front of the green before rolling up the slope and into the cup.

Her pinpoint shot means she will now line up in MDHIO’s grand final, which will take place in Augusta, USA during the Masters next April, where a repeat of those heroics will land her a stunning $1million jackpot.

MDHIO’s popular par-three challenge gives competitors the chance to win a selection of golf prizes for landing on their shot on the green, while a hole-in-one at one of the 40 associated courses across Europe earns a chance to shoot for the $1m jackpot.

The 2019 grand final takes place in Augusta during the Masters weekend when Erb will join the other finalists, while former England and Newcastle United football ace Alan Shearer, the ambassador for sister company the Million Dollar Club (MDC) is expected to be in attendance, as he was at last year’s final held at the prestigious Golf & Spa Resort Grand Tirolia Kitzbühel, in Austria.

MDHIO, which has been running since 1990 in the USA and 2000 in Europe, has grown in popularity over the years with more than 50,000 people each year now trying their luck at the various par-three holes at courses across Portugal, mainland Spain, Mallorca and the UK. More than 50 golfers have achieved their ace playing MDHIO in Europe, while more than twice that number missed out by not entering and acing the hole.