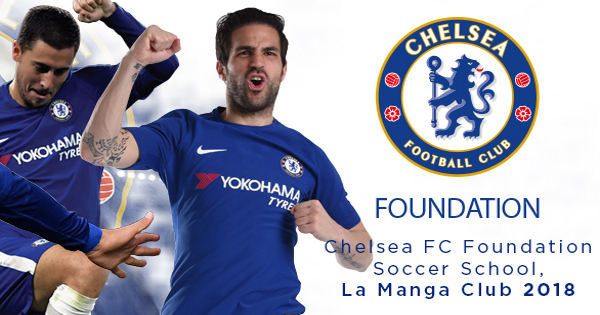 The Chelsea FC Foundation has helped thousands of children worldwide develop their footballing skills with its popular Soccer Schools, and it will launch its newest international junior academy at Spain’s five-star La Manga Club resort next Easter.

The first Soccer School will take place in Murcia from April 9-14, 2018, and offers the chance for youngsters to train using the same methods the Chelsea Foundation employs around the world.

The Easter training camp is the first of a series of junior academies that will be held at the top sports and leisure resort over the next three years, with a further two opportunities to take part next summer from July 2-14 and from August 20 to September 1. Bookings are now being taken for all three.

The Chelsea Foundation, which runs five other international soccer schools, is committed to developing the game across all levels and ages, with the academies at La Manga Club open to boys and girls between the ages of six and 16.

In addition, those taking part will also receive a certificate and medal for their attendance as well as a Chelsea FC Foundation and La Manga Club Nike-branded T-shirt and ball.

Prices start from €295 (approx £260) per person for a week-long training programme, while a family of four can book a seven-night stay in the resort’s four-star Las Lomas Village including two soccer school places from €1,850 (approx £1,640).

Boasting extensive facilities, including eight FIFA-approved grass pitches, the resort is a popular choice as a destination for domestic and international teams seeking a warm-weather football training break.

La Manga Club’s appeal as a world-class destination for football’s biggest names is stronger than ever, with no fewer than 75 clubs from 19 different countries having made their way to the award-winning venue for training camps this year, including Chelsea’s under-18 and under-23 squads.

As well as its football amenities, the resort boasts a fully-equipped gym and indoor swimming pool, ideal for recovery sessions; a host of rooms and spaces to cater for tactical meetings, private team dining and a new High Performance Sports Centre, where players can use the most advanced technology possible to study all aspects of their health and training programmes.

Set in 1,400 acres, the award-winning venue is also the official overseas training base of the Lawn Tennis Association (LTA) and offers unrivalled facilities as a sports and leisure destination including three 18-hole golf

courses, a 28-court tennis centre and a 2,000sqm spa and fitness centre. It also offers the choice of a five-star hotel, four-star serviced apartments and townhouses and more than 20 bars and restaurants.

For more details on the Chelsea FC Foundation Soccer School at La Manga Club  and to book, go to https://lamangaclub.com/en/chelsea-fc-foundation-soccer-school