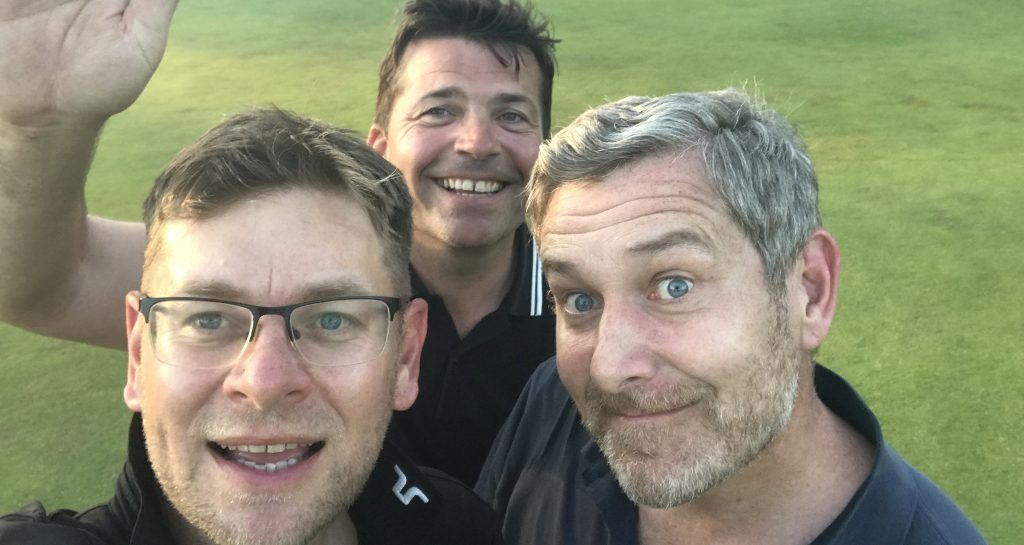 The trio all worked on the launch of the original London Golf Show back in 2005 and have remained firm friends. They were raising money in memory of the show’s former chairman, Colin Brunton, who died last year following a brave battle with cancer.

Andy Barwell, from Canterbury, now a director with marcomms specialist Azalea, was the London Golf Show marketing director back in 2005, and was joined on the fairways by the former event director, Jay Tyson – who now lives in Didsbury, Manchester – and former Eastenders actor Ryan Philpott, from Leigh-on-Sea, who was the show’s compere when it launched at ExCeL London, 13 years ago.

The trio teed off on Boughton Golf Club‘s first hole at 4.45am and completed their 72-hole marathon at 8.15pm, raising more than £1,000 in the process.

Barwell, Brunton’s nephew, explained: “We had been meaning to participate in Macmillan’s Longest Day Challenge for a number of years, but had never been able to co-ordinate our diaries properly.

“After Colin’s passing, we were determined to complete the challenge in 2018 and, while we were exhausted at the end, we’re delighted to have been able to honour his memory and play a very small part in the raising of vital funds.

Macmillan Cancer Support’s Longest Day Golf Challenge is an annual event in which teams of golfers attempt to play four rounds of golf in a single day, while raising funds to help people affected by cancer. Since 2002, golfers have raised more than £9m.

To support the trio’s efforts, donations may still be made at http://www.justgiving.com/fundraising/andy-barwell1