Golf365 Challenge Tour Blog: All set up for a Matt finish? 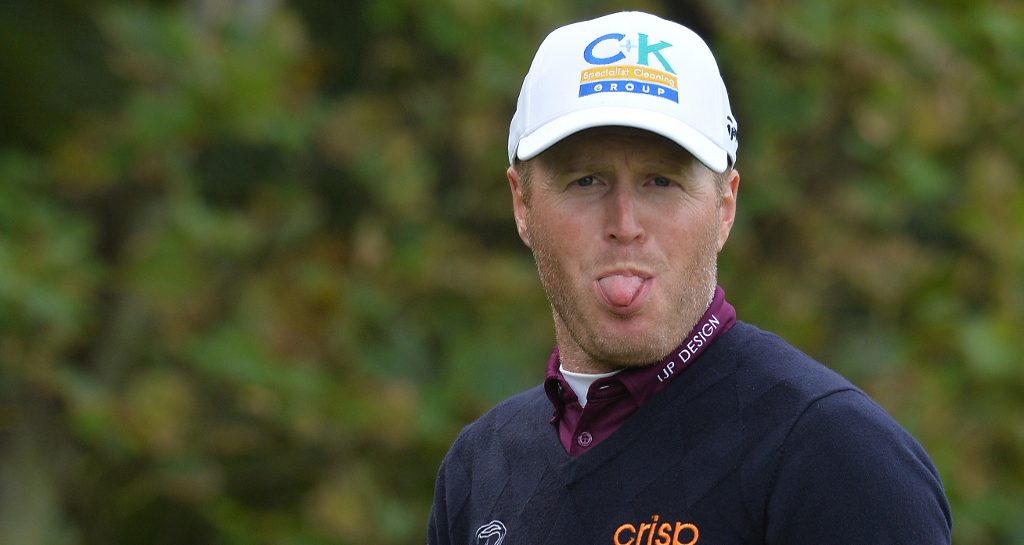 Dave Bowers is in France this week, taking in the sights and sounds of the Challenge Tour’s Hopps Open de Provence at Pont Royal.

There was to be no happy ending for Seve’s son, Javier Ballesteros, on the course his father designed at Golf International Pont Royal.

He failed to make the cut in the Hopps Open de Provence, but admitted that, while he was frustrated on a golfing level, he’d enjoyed his visit.

“It wasn’t that tough, I just made it tough,” he smiled. 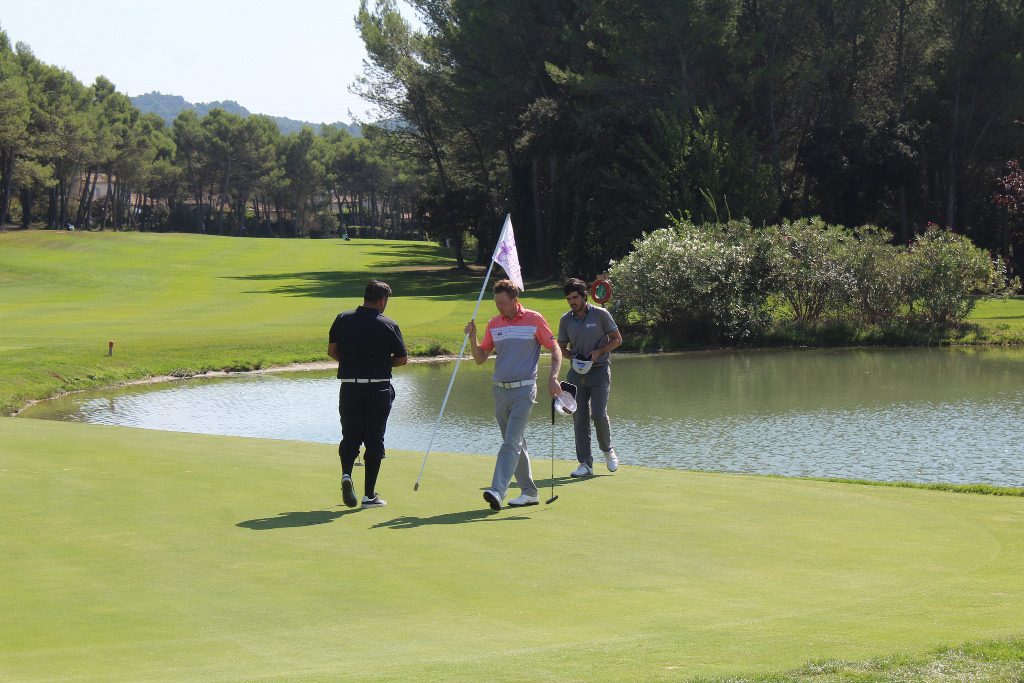 While he won’t be teeing it up at the weekend there will certainly be sufficient entertainment for what’s expected to be another decent crowd. What’s more, there’s good French interest challenging at the top of the leaderboard, with Romain Langasque, at nine under, and Victor Perez, a shot further back.

Langasque’s successful birdie putt on the ninth hole, his last, was greeted with a loud cheer from the day’s largest gallery. But even that wasn’t the biggest drama of the day – that came courtesy of a ‘rosbif’: Swindon’s 40-year-old Matt Ford, who set a new course record with a flawless 12-under par 60, featuring 10 birdies and an eagle to hold the lead at 15-under par. Not surprisingly, it was the lowest professional round of his career.

One of the larger galleries of the day hardly moved at all, sat as it was by the 13th green – a great spot for spectating as it is located alongside the ninth green, offering two for the price of one – let’s call it Pont Royal’s ‘unhomme’ corner … 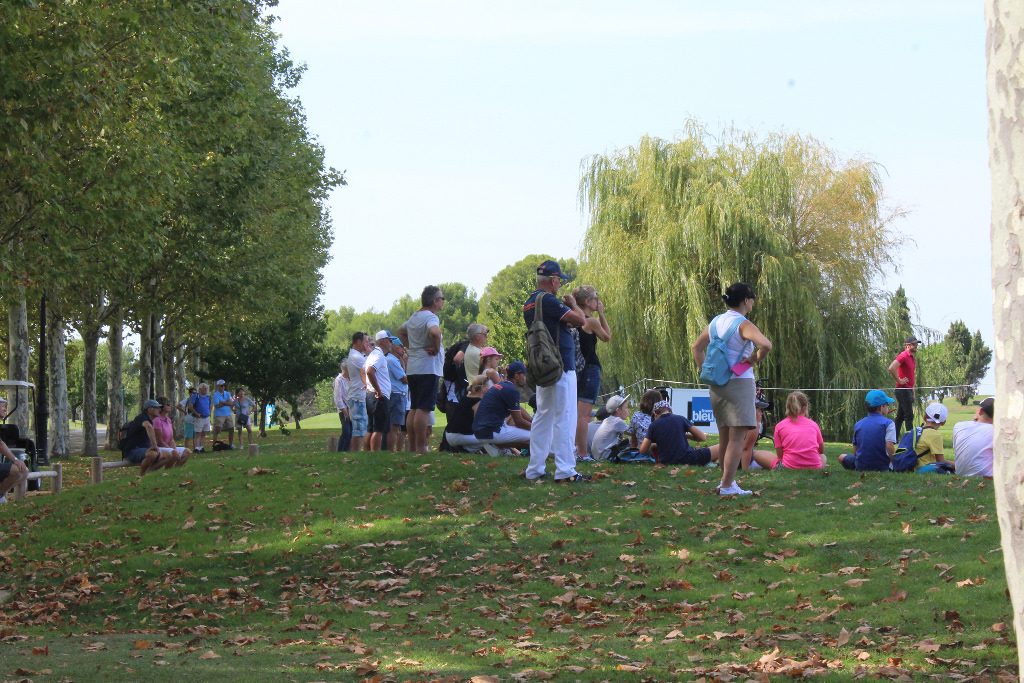 It comprised a large number of schoolchildren who seemed rapt by the golf on show. They are part of a programme locally to get youngsters interested in the game – and, on this evidence, it’s already working.

They were dressed as you would imagine primary schoolchildren would be on a day trip out in 32 degrees: largely T-shirts and shorts and, thankfully – for the concerned parent in me – lathered in sun-cream.

One young chap at the side of the 18th green was bemused and delighted in equal measure when one of the pros walking off lobbed him his ball. Another youngster with a memory to last a lifetime. 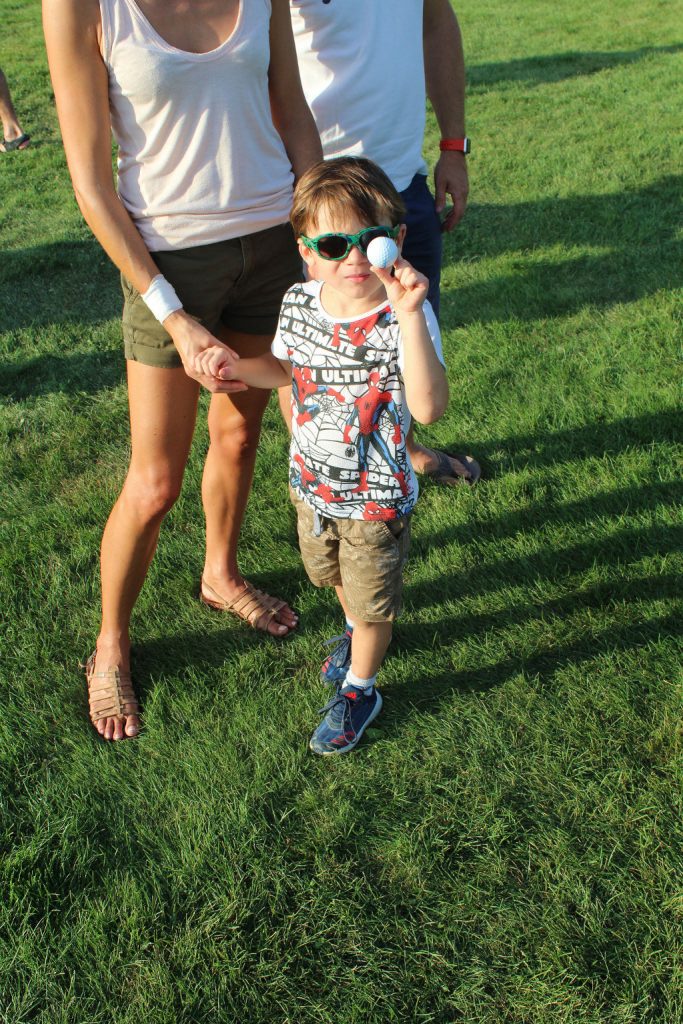 While kids wore the regulation T-shirts I was amused – it always does make me smile – by the attire worn by the majority of other spectators. Most wore golf clothing from head to foot: why do we do that when we’re only spectating? One doesn’t dress in a dinner jacket to see the latest James Bond flick at the cinema, or pad up in all-whites to watch the cricket at Lord’s.

I think it’s our subliminal way of telling everybody that ‘I play too you know’. That and the fact golf apparel has become increasingly ‘street’ in recent years.

More traditionally, on course – amazingly given the temperatures here – there was still room for somebody to play in plus-fours.Take a bow Joel Sjöholm.

Anyway, I digress. If you want an insight into the personalities of some of the players you can do worse than seek out the company of the starter. At Pont Royal, on the first two days, there have been two – one on the first and the other on the 10th – and I spoke with them about their experience.

What surprised me was the edict from the Challenge Tour officials about timings. If the tee-time is 8:40 they are to be sent off at 8:40 precisely, not a minute earlier – even if the course is clear – nor a minute later. And, if there is a hold-up in the group ahead which necessitates them being sent off a couple of minutes late, that should be radioed through to the office for recording. 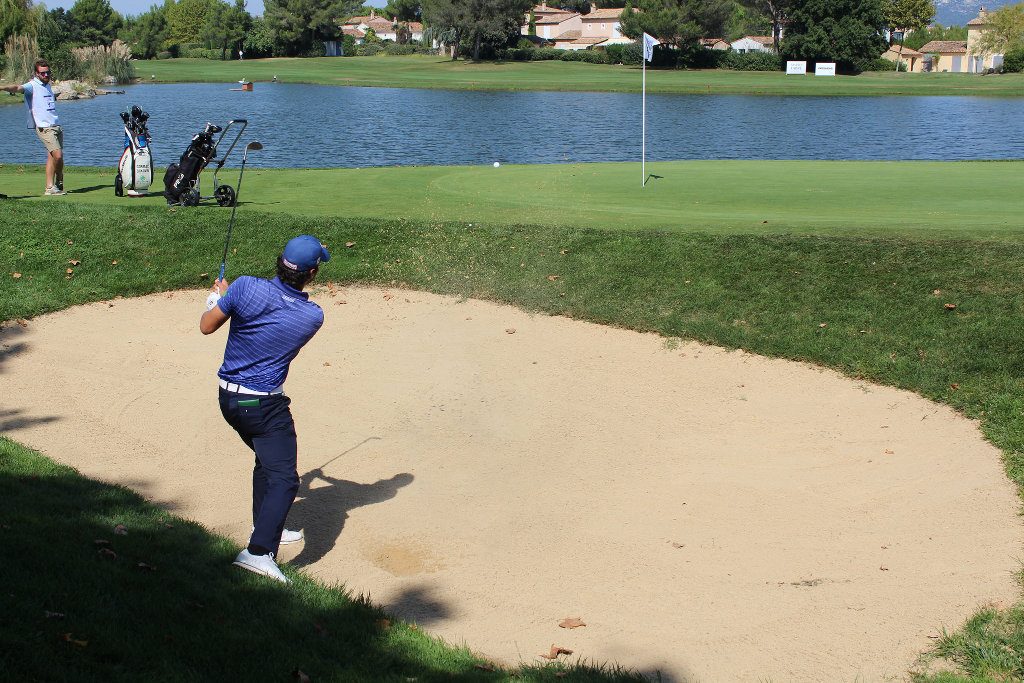 The reason for this is simple: they’re on the clock from minute one. It’s good to know that slow play is being monitored, although there were still rounds of more than five hours today and that frustrates most of the players as well as the spectators. Chop, chop chaps …

The word schadenfreude could have been coined for the feeling one has as a spectator, watching a guy take 30 seconds of wiggling and deep breathing over the ball, only for it to arc into the water at the side of the green.

And talking of greenside water, back at the 13th, we’ve seen a confrontation. Not of the ‘get in the hole!’ spectator sort, but of the ‘get orf moi land’ style. The lake which separates the 13th and ninth holes is home to a family of very handsome black swans. Get too close to them and they’ll pull themselves up to their full height, stride on to the green, and have a quiet word with you.

The are striking and certainly the players appear more fascinated with them than anything else. 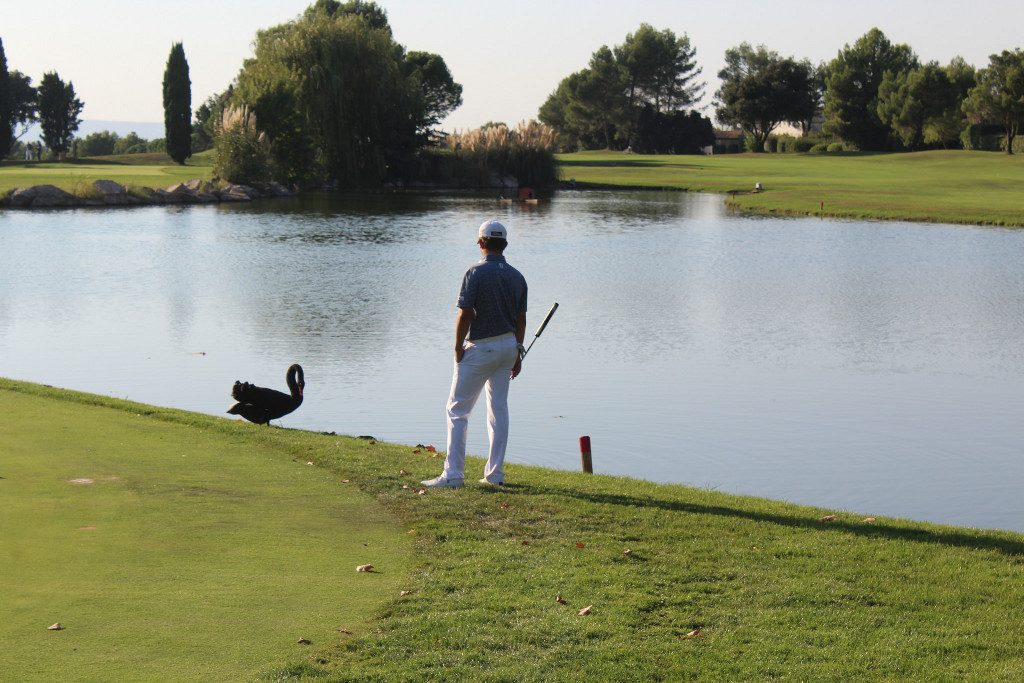 They’re not the only residents of the domaine at Pont Royal with a birds-eye view of proceedings. The houses here are set way back from the fairways, so they don’t impose on the course in the way they do at some developments elsewhere in Europe and the USA. It also means residents can wander out and enjoy a pleasant few hours of golf watching and still manage to keep tabs on the bouillabaisse cooking away inside.

They’re a pretty cosmopolitan crowd too: French, British, Dutch, German, Scandinavian … I think I even heard a Russian accent on the terrace. It’s all very friendly though and I would have been able to engage in a lot more conversation than simply ‘bonjour’ had I paid more attention in my French classes at school. Let that be a lesson to you, kids!

I didn’t need to hear his voice to recognise one of the patrons enjoying the bonhomie – the eyes gave him away. Thomas Levet popped in, maybe to see one of his proteges in action. He certainly wouldn’t be disappointed to see four Frenchmen in the top 15.

But they’re going to need to pull a lapin out of a chapeau, if they intend to haul in Matt Ford.

Check out the leaderboard at the Hopps Open de Provence here.